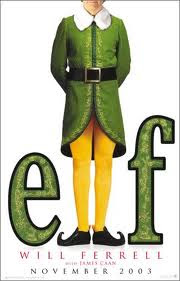 Director: Jon Favreau (2003)
Starring: Zooey Deschanel, Will Ferrell, James Caan
Find it: IMDB
A human raised as an Elf (Ferrell) in the North Pole with Santa, Buddy heads to New York to find his real parents. His real father, Walter Hobbs (Caan) is a grumpy professional with no sense of Christmas spirit. Inbetween ruining his father's life and ripping off The Jerk, Buddy meets Zooey Deschanel and fools her into thinking him worthy of her love. Sigh.
Bearing in mind that The Jerk and Enchanted did this sort of thing so much better, Elf is a fine fish-out-of-water comedy. Will Ferrell is amusing as Buddy, as is Caan as his father. Peter Dinklage is a highlight, whilst Zooey Deschanel is in this movie. I don't like watching Elf because Deschanel's scenes with Ferrell make me jealous. Everything else feels vaguely predictable but hard to dislike. Even Will Ferrell's now overdone screaming childishness fits the role. Individual scenes are enjoyable, such as Buddy's snowball warfare expertise and his interactions with Dinklage.
As Christmas movies go, Elf is the one I would be most likely to watch. Well, unless I had a choice between that and Black Christmas or Silent Night, Deadly Night. I'll rephrase: Elf is the 'proper' Christmas movie I would be most likely to watch. And even then, I'll be spending most of the film thinking either about how awesome Zooey Deschanel is, or that one time James Caan got murdered by Santa in Santa's Slay.