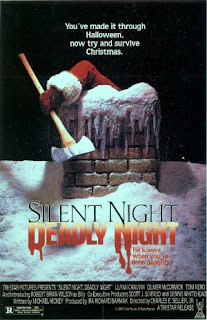 It's your Horror Review Advent Calendar.
25 Christmas themed movies.
Ho, ho, ho.
Director: Charles E Sellier Jr (1984)
Starring: Robert Brian Wilson, Danny Wagner, Linnea Quigley
Find it: IMDB
A bit like Halloween, in so much as it’s set during a titular Holiday. Other than that, it’s nothing like Halloween. After a series of childhood traumas, a troubled, Christmas-hating youth goes on a Crimbo killing spree, murdering everyone on his naughty list. Also of interest: Nuns, shagging, bosoms, a rapey Santa Claus and plenty of assorted festive cruelty.
As the movie begins, we meet young Billy Chapman, his parents and baby sister. They’re a very nice, all-American family, and as such are doomed to die. But before all that, the family visit their crazy grandpa at his home in a cosy mental institution. They then leave young Billy alone with the old coot. Crazy granddad proceeds to traumatise the poor kid, telling him that “Christmas Eve is the scariest damn night of the year,” that Santa punishes the naughty kids, and that he better run if he sees Santa. Sounds like someone’s been watching Santa’s Slay.

Not traumatised enough by his own grandfather, Billy goes on to see his family murdered by a fella dressed as Santa. Looks like Gramps ain't so crazy after all. His parents dead, it's at this stage where a kid either decides to dress up as a giant bat or become a serial killer.
But with no kindly English butler to look after Billy, the poor kid finds himself in an orphanage. Still traumatised by his experience at the hands of Santa Claus, he passes his time by drawing lovely pictures of murdered Santas and beheaded reindeers. Kid’s got talent, reminiscent of the work of Charlie Bronson. More trauma is heaped upon poor Billy as he gets himself a beating from the orphanage’s Mother Superior. Lesson learnt: “Punishment is good”. And so Billy grows up to become the movie’s villain; a punisher of petty crimes; like the Punisher, but with added jolly.

Like many 80s’ slasher movies, Silent Night Deadly Night isn’t too scary, but is plenty creepy. It’s lurid and often gratuitously cruel. Does anyone really need to see a lady raped by a chap in a Santa costume? Not really, but the creepiness of it all is excellently done and partnered with a wonderful soundtrack of standard 80s’ synth and cheesy Christmas music. It’s lighter on the gore than its notoriety might suggest (a bunch of outraged mothers got it pulled from several cinemas), but it’s sleazy enough anyway to make up for the lack of onscreen claret. Plus, there's this, the greatest sequence of events ever to grace a Christmas film since Billy Bob Thornton beat the shit out of a child in Bad Santa: 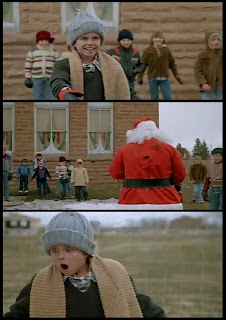 Of the myriad of Christmas horror movies, Silent Night Deadly Night is perhaps my favourite. The story’s generic, but not so much that it can’t hold a few surprises. Billy’s transformation from innocent wee kiddiwink to traumatised psychopath is a plausible one; you too would likely go crazy if you had as much shit heaped upon you as he gets in this movie. And the pace is not as slow as Black Christmas, the tone less overtly silly than Gremlins or Jack Frost.

So if you thought that the likes of Fred Claus are too light on the stabby-stabby, beheadings and impalements (and yes, it was. Incidentally, that film is vastly improved if you imagine Paul Giamatti burying an axe in Vince Vaughan's fucking face) then Silent Night Deadly Night is surely the flick for you.