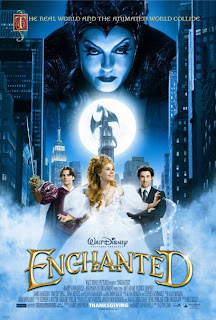 Director: Kevin Lima (2007)
Starring: Amy Adams, Patrick Dempsey, James Marsden
Find it: IMDB
Those of you who thought that Mean Girls might just be the zenith of my girly tastes underestimate the existence of Enchanted, a film about a Disney Princess who gets magicked into modern day New York by an evil witch. Altogether now; "awwwwww."
But as is the case with Mean Girls, it's perfectly acceptable for me to enjoy Enchanted, because it is a genuinely funny, charming movie. Amy Adams is the Disney Princess in question. She's well-cast, since she has an adorable aura of innocence and Disney about her. Queen Narissa (Susan Sarandon) tires of Amy Adams's adorable ways, and banishes her from the animated Disney universe. Trapped in real-life New York, Princess Giselle meets grumpy divorce lawyer Robert (Dempsey) and begins to warm the cockles of his glum heart. Mine too.
Thankfully it's not all sweet romance and girly stuff, otherwise I might be less inclined to like Enchanted. It's essentially a fish out of water comedy in which a Disney Princess makes a dress out of curtains and fills a man's house with gross inner city pests. There's also Timothy Spall being weird, Susan Sarandon being evil and James Marsden being just delightfully dim. James Marsden's character in Enchanted is the quintessential James Marsden role; nice, heroic, handsome but dull. Always overshadowed by Wolverine, Superman or a grumpy divorce lawyer. I always root for James Marsden to win the girl in all of his films, since he's always so earnest. As Cyclops he lost Jean Grey to a man with stupid sideburns. As Richard White he lost Lois Lane to a superpowered alien stalker. And as Prince Edward, he loses Giselle to a miserable divorce lawyer. Not cool. James Marsden is the posterboy for unrequited lovers everywhere, always losing the women he loves to bastards. James Marsden's constant singledom is proof that women love a bastard.
Enchanted is a lovely film to melt even the glummest of hearts. Quite simply, it's enchanting. You see what I did there.