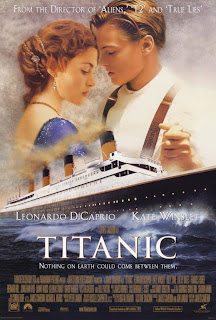 Director: James Cameron (1997)
Starring: Leonardo DiCaprio, Kate Winslet, Billy Zane
Find it: IMDB
A rich woman called Rose (Winslet) meets a cheeky working-class scamp called Jack (DiCaprio) and they fall in love on a boat whilst Celine Dion sings a horrible crime against humanity all over the place. Jack and Rose romance around the boat, then he draws her naked in a car. Rose's fiancee Cal Hockley (Zane) is understandably angered. Also, the boat hits an iceberg, the boat sinks and lots of people die.
It's a great disservice to all those who died on the Titanic that the stupid, cloying romance between Jack and Rose should be the main focal point of Titanic. It's a great disservice to people who like their ears unassailed by horrible music that Celine Dion should feature so prominently on the soundtrack. Once the boat sinks and Billy Zane goes crazy with a gun, Titanic becomes more watchable. Any movie is improved tenfold with Crazy Billy Zane. Except for Survival Island, which is always terrible.
Titanic is proof that people have always enjoyed rubbish films, manipulated by an easy romance and a beautiful pair of leads. One can only hope that in time, those who love Twilight will come to realise the error of their ways as well. Titanic is the first vastly overrated movie of James Cameron's career, prefiguring Avatar by over ten years. Although it took James Cameron fifteen years to write Avatar ("hmm, what should I call this unobtainable rock which everyone is after? Damn writer's block!") so maybe he just had a lot to get out of his system.
I much prefer the version of Titanic with Tim Curry. Not that I can remember anything about that movie other than Tim Curry being evil. That one has a stupid romance too. But crucially, no Celine Dion.
Look, don't listen to me. I'm a stupid horror idiot. My favourite doomed boat movie is Ghost Ship.