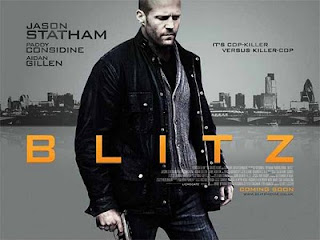 Director: Elliot Lester (2011)
Starring: Jason Statham, Paddy Considine, Aiden Gillen
Find it: IMDB
An insane serial killer is offing cops down in London town. Angry Sergeant Brant (Statham) is dispatched to catch him before he kills again. He's teamed with straight-laced homosexual Porter Nash (Considine). Note his sexuality. It's important, apparently. They talk about it all the time. "You're a good cop" says the Stath to Porter "...for a poofter." Charming. Statham is woefully miscast as Brant, a character completely out of place in his own movie. Elsewhere, Blitz looks and feels like a TV cop procedural. Whenever Jason Statham is around, it feels like a TV cop procedural... with Jason Statham.
Why everybody cares so much about Nash's sexuality is beyond me. I understand that the police force is a very macho environment, but the script has Brant spouting homophobia in such a manner that you'll expect George Takei to turn up at any moment and out him as a douchebag. We get it, Nash is gay. Brant falls asleep at Nash's house and the first thing he does when he wakes up is to check that he wasn't "interfered" with. It's all part of an effort to paint Brant as an archaic dinosaur, but the film isn't portraying this as anything but cool. Brant is an alcoholic, boorish, bullyish, violent thug. And according to Blitz, there's nothing wrong with that at all.
Elsewhere, it's no more a typical Jason Statham movie than The Bank Job. All of the action scenes are plain to see in the trailer. This is a slow-burning serial killer piece with more in common with Dirty Harry than The Transporter. Certainly, Aiden Gillen's villainous 'Blitz' has much in common with Dirty Harry's Scorpio; the rockstar swagger, the smugness and complete lunacy. Even the game he plays is the same, getting himself brutalised by the police so he can turn himself into the victim. Unfortunately, Sergeant Brant is no Harry Callahan and Jason Statham is no Clint Eastwood. The Stath is one of my favourite modern action heroes, but Blitz is simply the wrong showcase for his talents.
Paddy Considine brings his calm, considered brand of Northern charisma to the role of Nash. It's a shame that both the actor and character are wasted here, since he's a likeable presence. Even without his immense Dead Man's Shoes beard, he owns the film. Overshadowed by a lost Mitchell brother, he becomes as underused as David Morrissey's journalist. I'd have much rather seen a film in which Considine and Morrissey team up to take Blitz down themselves; they couldn't do any worse than Brant, who patently shouldn't be allowed on any police force. Blitz does not do the London police any favours.
Blitz is a disappointing waste of talent and good ideas. There's much to enjoy. Considine, Morrissey and Gillen transcend Statham's macho rubbish often enough for it to remain vaguely classy, and there's an appearance from the greatest shell-suit ever stitched. Then a man gets drowned in a toilet.
Blitz could and should have been a lot better, but is still worth screening.