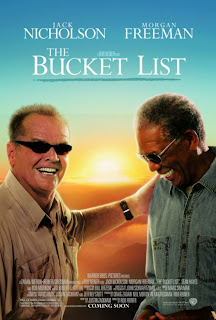 Director: Rob Reiner (2007)
Starring: Jack Nicholson, Morgan Freeman, Sean Hayes
Find it: IMDB
More narration duties from Morgan Freeman, despite the fact that (a) it's his own movie, and (b) his character is supposed to be dead at that point. The implication being that there is an afterlife, and god has allowed Morgan Freeman to continue narrating from there. Although that's just one way of looking at it. I myself would suggest that Morgan Freeman's narrations are a force of nature, and now unbound by body, his spirit is free to go around mystically narrating things everywhere, always.
Carter (Freeman) and Edward (Nicholson) are two very different men from very different backgrounds. Carter is a working-class mechanic who knows a lot about trivia and smokes. The only way you can get away with showing someone smoking in a film now is if that same someone then spends the rest of the film dying of cancer. Edward is rich, owns hospitals and goes on dates with Michelle Pfeiffer. The two men are basically playing themselves in The Bucket List, only this time with cancer. They share a room in Edward's hospital and become friends. As they each receive a terminal diagnosis, they write a 'bucket list', funded by Edward's millions.
Together they travel the world, dining on caviar, skydiving and driving flashy sportscars. Evidently Edward's millions couldn't cover an extra body, since Carter leaves his wife, children and grandkids without a second thought. It's a wrinkly, cancerous bromance. In which they both die at the end. That's about as much a spoiler as my saying that the boat sinks at the end of Titanic.
The Bucket List, thankfully for my tear ducts, is not a morbid film. They're both dying and it looks very painful, but the movie is imbued with a celebratory, cheerful atmosphere. Tears will be jerked at the end, but not in a wallowing, Requiem For A Dream kind of way. But for all the cheer and boyish enthusiasm, The Bucket List is very predictable and not even very insightful. Every beat is telegraphed from the start, from Carter's reconciliation with his wife to Edward's with his estranged daughter. Furthermore, I was irritated by a scene in which Carter tries to 'convert' Edward atop the pyramids. If I went around forcing The God Delusion upon dying friends, there'd be an uproar. But because Edward is an atheist, it's perfectly fine to sneer at his views and tell him he should believe in god now that he's dying. Piss off. Edward's money he made at the expense (boom boom) of friends, family and faith. Money which he is using to drag your condescending Christian carcass around the world. That's gratitude for you.
The Bucket List is serviceable shmaltz, the movie equivalent of those facebook updates dedicated to victims of cancer everywhere, disapproving of the "99% of people who won't repost this". You'll go away with an "aw, how sweet" and maybe a tear in your eye, but it won't change anything. Although it did leave me wishing I too had a rich friend.