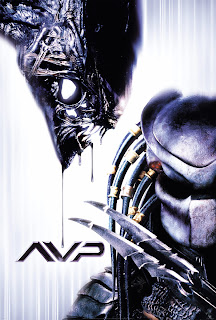 For some reason, I'll watch Paul Anderson's (no, not that one) Alien vs Predator once a year, surprise myself at how much I enjoy it, sleep/get drunk, then forget and go back to thinking of it as an abortive turd. Of course it is a bit of a turd, but only in the same way as Freddy vs Jason or Alien Resurrection (which I secretly kinda dig). But it's not as stinky a turd as one might have come to expect.

It helps if one lowers their expectations. Upon first viewing, the true Aliens/Predator fans will baulk, as 18-year-old me did at the sight of all the nonsensical underground pyramid goings on and the relatively useless Predators. No Ripley. No gore. No swearing. Teenage Predators. Sigh. It feels more like a videogame adaptation than it does a sequel to either Aliens or Predator. But look beyond that, there's gold to be found in them thar hills. Alien vs Predator is worth a look for Aztec God Predators alone. And a scene in which a lone Predator faces off against a veritable hive of Aliens.
An underground pyramid is discovered in Antartica. Mr. Weyland (the one and only Lance Henriksen) leads a team of scientists, tough guys and a mountaineer (Latham) down to investigate. What they find is an ancient coming-of-age ceremony which pits dribbly Aliens against pubescent Predators. Which is all fine and well, but how did the Predators know that there'd be any humans down in their pyramid to kick start their chain of events? It relies on massive coincidence, and without the humans, our Predator friends could've just been fighting facehuggers and a chained up Queen. Kind of a good thing for them that Weyland happened to be passing and incompetent enough to get his whole team captured. And shit, aren't they both Alien species anyway? Surely the movie shoulda been called Alien vs Different Kind of Alien? Or Two Ugly Motherfuckers?
Plot niggles aside, the movie delivers plenty of Alien vs Predator beatdowns, some surprisingly sympathetic characters and enough nods to the respective franchises to keep longtime fans amused. Sure, the Predators are kind of chumps, and their unmasked faces look a bit plastic. But you can see what's going on, which is more than you can say for Requiem. As AvP bows out, it sets itself up for a sequel. A wholly different kind of movie - simultaneously a lot better and a lot worse than this one here.