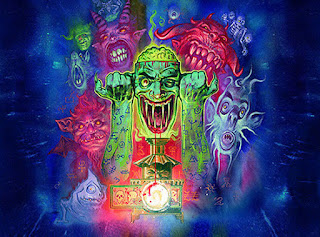 As anyone who is unlucky to follow me on social media will know (you're not missing much - self-promotion and live tweeting of really old Star Trek: The Next Generation episodes mostly), this year I attended London FrightFest on behalf of the wonderful Starburst Magazine. I saw a lot of films while I was there - twentysomething in total - and spoke to some pretty great people. The festival is a wonderful experience; a celebration of all things horror, new and old. Not for nothing is it described as 'The Dark Heart of Cinema.'

Highlights include the riotous Deathgasm, seasonal anthology movies A Christmas Horror Story and Tales of Halloween, creepfest Slumlord, the dark and brutal Bait, and the mesmerising Curtain. I saw some not-so-good movies too, but the great by far outweighs the rubbish. The same applies to these reviews, I hope. 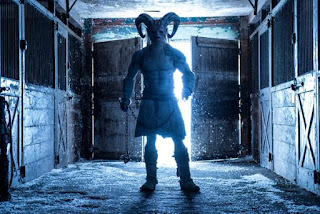 A Christmas Horror Story - The most fun I've had with a Christmas movie while sweating my balls off in late August.

Awaiting - Interview with Diana Vickers - She wore shoes throughout the whole interview. And was lovely. 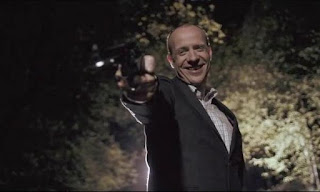 Cherry Tree - Daffy as fuck, like The Witches crossed with Juno, plus body horror, burlap sacks and centipedes.

Curtain - The best horror movie about a shower curtain you will ever see,

Deathgasm - I laughed so hard I spilled my beer on my lap.

Inner Demon - A girl sits in a cupboard while the plot of a horror movie happens around her.

Night Fare - The Punisher meets Maniac Cop in a taxi.

The Nightmare - Don't have nightmares. Rodney Ascher would really, really like that.

Night of the Living Deb - Shaun of the Dead meets Bridesmaids. 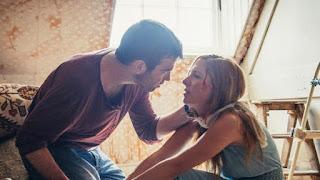 Road Games - Too slow and melodramatic for me, although the final act livens things up.

Slumlord - Scummy take on One Hour Photo with a creep antagonist to rival The Human Centipede's Martin.

Some Kind of Hate - Smart and powerful: an angry It Follows.

Suspension -  Predictable Halloween rip-off with a twist which ruins everything. 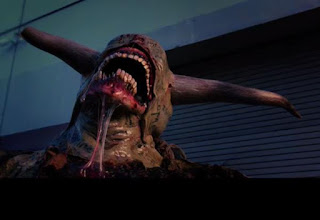 Turbo Kid - Adorable, hilarious, and so very bloody. Michael Ironside is having a ball, and so did I.

And so it ends. Until next year, anyway. Thanks to Starburst Magazine and Horrortalk.com for having me, and hosting my opinions (even the stupid ones). And thank you to Film4 FrightFest for yet another bumper year of treats and goodies. 2016 can't come fast enough.
0 son(s) of a thousand maniacs 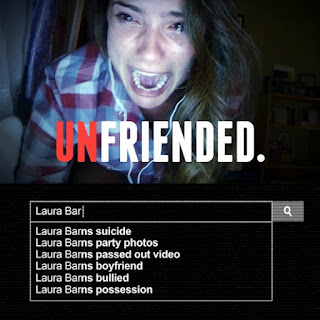 As I rapidly approach what will be my thirtieth birthday - hello grey hairs and groaning whenever I sit down or stand up - I find myself feeling increasingly out of touch with the 'kids' and their antics in the movies I watch. Case in point, Unfriended, which is best described as a series of conversations between dickheads on Skype, Facebook and iMessage. Watching this felt like that one time I accidentally stumbled upon a sibling's MSN chat history, or my morning commute to work, where I often find myself surrounded by vapid imbeciles and their social media.


It won't appear on (m)any 'best of' lists come the end of the year, but if it's superlatives you're looking for, Unfriended might just be the most annoying horror film of 2015. Its squad of chums are the ones getting terrorised, but I was left feeling like the ultimate victim - trapped in a Skype conversation that just won't shut down with arseholes who just won't shut up.

Most of my least favourite sounds in the world are social media related - the Skype ringtone - Facebook notifications - anything that tells me I have a 'new message' - (make of that what you will, and stop talking to me) so Unfriended was always going to set me on edge. The rest tipped me over it, from the pre-horror banter to the hysterical screaming and wailing which comes during (although I did cheer during at least two murders). 'Why don't they put down the camera?' is a question I've always asked of found footage. Here I find myself begging that they hang up Skype and turn the fucking thing off.  Kids and their technology, I guess.

This all being ghost vengeance for a cyberbullying crime which ended in a girl killing herself. It's a very real issue and, frankly, the movie does a great job of selling just how awful cyberbullies are. In that respect, Unfriended is a resounding success. It commits to its concept and it commits hard; unlike the (far superior) The Den and (wacky but still better) Open Windows, there's no cheating - the entire thing takes place in real time, on one person's desktop. I don't like it (Facebook reference) but there's a surprising amount of respect there, for a movie I hated every single moment of. 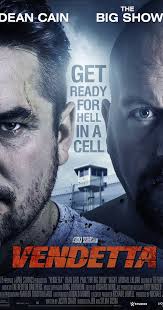 Heresy! As a fan of horror movies and the talent therein, it shames me somewhat to admit the fact that I am not a fan of the Sisters Soska. No member of the Twisted Sisters Army am I. That's not for want of trying - I've given everything they've done thus far a fair chance, but something about all of it has rubbed me up the wrong way, whether it's their overrated American Mary or unbelievably dull See No Evil 2.

I had no high hopes for Vendetta, then - the latest WWE feature helmed by the Soskas. When the best thing your studio has ever put out is the misogynistic Battle Royale rip-off The Condemned, audiences will tend to worry. Nevertheless, I like prison movies and I like the idea of the Soska sisters, so I decided to give this one a chance. Here, Dean Cain (yes, that one) plays a tough detective, pushed to breaking point when enormous criminal Victor Abbott (The Big Show) murders his wife. Launching into a vengeance fueled (but still illegal) killing spree, Detective Superman is arrested and locked up... in the same prison as Abbott, no less.

It's similar to the Jean Claude Van Damme STD feature Hell in that budgets are low and the action is restrained. Detective Danvers gets on about as well in jail as one might expect an ex-policeman to, being on the receiving end of several brutal beat-downs and dust-ups during his stay at the penitentiary. The (Big) showdown with Abbott is put off until the end, mostly while the screenwriters try to think up a way how Dean Cain could ever plausibly take The Big Show in a fight. Everyone else is just practice, letting Cain add a slightly chubby version of The Punisher to his superhero playbook (less good than his Clark Kent).

Vendetta is a fine addition to WWE Studios' film lineup, being one of the better movies they've yet released. As per a production house who tends to specialise in films about hench men punching each other in the head (plus really shitty slasher movies) it's not the most gender progressive - the only female in it gets one scene before being shoved unceremoniously into the refrigerator - so Orange is the New Black this ain't. As good a job as they do, it's a curious use of the Soskas' talents, who should by now truly be the heavy hitters that the horror community have always made them out to be. Taken on its own merits, Vendetta is just fine. As a WWE picture, it's above average. As a Soska movie, it's the one I've enjoyed the most. And that really shouldn't be the case.