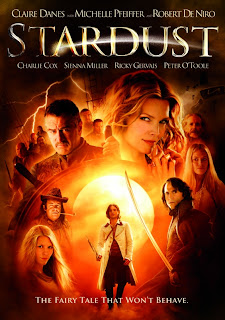 Director: Matthew Vaughn (2007)
Starring: Claire Danes, Charlie Cox, Michelle Pfeiffer, Mark Strong
Find it: IMDB
A very adult fairytale from the team that brought you Kick-Ass (director Matthew Vaughn and writer Jane Goldman) and a certain Neil Gaiman. Starring Mark Strong with a disconcerting amount of hair, the wonderful Michelle Pfeiffer as an evil witch and Robert De Niro in a dress. Naive young romantic Tristan Thorn (Cox) is in love with Victoria (Sienna Miller) whose heart he promises to win by retrieving a fallen star from a faraway land. Only the falling star happens to be an actual girl named Yvaine (Danes) who doesn't want to be anybody's gift. Evil witch Lamia (Pfeiffer) needs to eat Yvaine's heart to be young again, whilst Septimus (Strong) needs her to become king of the land. Phew.
An adult but not puerile fairytale, Stardust is a joy. It's so packed full of stars that the IMDB doesn't know who to list first. Especially so if you're British. A good 60 or so percent is made up of English actors and comedians, all of whom hit the spot. Unless their name is Ricky Gervais, whereupon it's a bit embarrassing. Stardust was made during a period in which Gervais would cameo in anything, his appearances becoming more and more cringeworthy. Ricky Gervais is 2007's James Corden.
Stardust is a lovely movie, designed to warm the heart as much as it is to thrill and amuse. The writing/directorial partnership of Jane Goldman and Matthew Vaughn is a strong one, and they bring us distinct, likeable characters as they did with the later Kick-Ass. Even the villains are sympathetic. I want a jacket like Mark Strong's. Michelle Pfeiffer looks just as hot now as she did in Batman Returns. Rupert Everett is thrown out of a window as a host of British comedians look on.
I even like the song by Take That. Which is not something one is supposed to admit in public; not unless you're a 40-year-old woman, anyway.