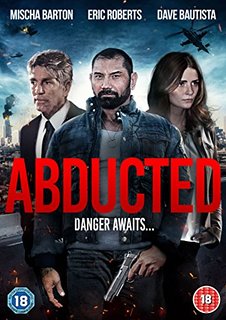 When his daughter (Barton) is kidnapped by Eastern European gangsters, rogue special forces agent Frank Hardcastle (Bautista) is forced to take matters into his own burly, callused hands, breaking necks and taking names (in that order, which unfortunately hampers his investigation quite a bit). Along with ex-colleague, betrayer and eventual cannon fodder Jesus the Goon (Trejo), Hardcastle sets out along the twisted and bloody road of bodies to Roman Casanova (Eric Roberts) the man - and Vice President of the United States of America! - ultimately responsible. Danger, as the tagline promises, awaits.

Nah, I'm just shitting you. Dave Bautista plays a drug dealer and, with Danny Trejo, is in the movie for less than ten minutes. That's more than some, though: Eric Roberts is in precisely one scene. If you bought the DVD of Abducted, rented Abducted, streamed Abducted, stole Abducted (for shame) or watched anything with Abducted in the title, the joke's on you, because Abducted ain't the movie you're getting.

Straight to DVD action fans will in fact be sorely disappointed by the retitled and remarketed L.A. Slasher, which bears precisely nothing in common with the movie promised by the UK DVD case. Cashing in on the recent popularity of Bautista, of Guardians of the Galaxy and Spectre fame, it promises a Taken rip-off which L.A. Slasher couldn't be any less if it tried. Those who tune in wanting to see Dave Bautista stomp some face will not be happy bunnies. 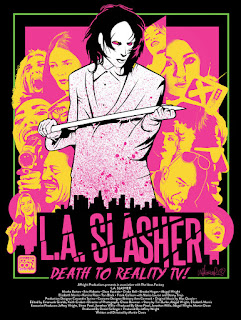 Oh yeah, this thing is totally the same as the other thing.

There is some danger though, so it's not all lies. Pissed off by an endless parade of talentless dimwits becoming famous for their sex tapes and lack of brains, a serial killer begins kidnapping the reality TV stars of L.A. and broadcasting their murders for our satisfaction. And yet, as his star begins to rise, the slasher threatens to become the thing he hates the most: Internet famous. 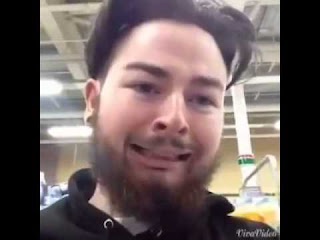 Martin Owen's  L.A. Slasher is a lurid, hypnotic cross between Drive and Kill Keith - a truly weird slasher film that transcends its limited budget with style, sass, all-star cameos (within reason) and a soundtrack to die for. Its message is outdated by over ten years, and it's not as funny or clever as it should be, but it is a movie that demands one's attention - not to be hidden under a fake name with a mildly perplexed Dave Bautista on the cover.

On that note, I should probably have wrote more than just a paragraph about it, too. Oops.