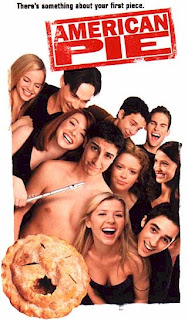 Director: Paul Weitz (1999)
Starring: Jason Biggs, Chris Klein, Alyson Hannigan
Find it: IMDB
I once deleted a college friend of five years off've facebook (or 'unfriended' him, if you want to get all technical) because he described American Pie 3 as a "class film" in a status update. To say that I hate the American Pie franchise would be an understatement; I hate the films individually, I hate the films collectively and I hate everything they represent socially and in popular culture. I hate the stupid characters. I hate the stupid script. I hate the stupid situations of stupid social awkwardness that the stupid characters stupidly get themselves into. I hate American Pie and I hate the fact that somebody managed to make a franchise in which the big joke revolves around some stupid kid masturbating into an apple pie.
American Pie is a film in which teenagers try to get laid. I hate films about teenagers and I especially hate films in which they try to get laid. Trying to get laid should be interesting to nobody except for the person trying to get laid. And even then, most of the time it's pretty tiresome. Except no, since everybody else in the world other than me loves this franchise.
You don't understand how much effort it takes for me to hate a film that stars Alyson Hannigan and Seann-William Scott. Alyson Hannigan is great - she's Willow from Buffy - and Seann William Scott is funny in everything he's in - but even they can't make American Pie good. American Pie brought so much to popular culture that it depresses me. The 'Stifler's Mom' nonsense pretty much created the whole MILF thing, whilst you'd be hard pressed to find someone who doesn't know the significance of the titular pie. Jason Biggs fucking that pie is responsible for a worldwide stupiddening that we've still not recovered from.
Fuck off you stupid, smug, sexist little boys, and take your wank-filled apple pie with you. This year heralds an American Reunion. And there was I hoping that they were all dead.