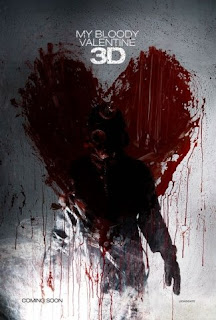 
After a tragic mining mishap (caused, needless to say, by Jensen Ackles) moody miner Harry Warden goes on a Valentine's Day killing spree, where he gatecrashes a party, murders a bunch of people and traumatises young Tom (Ackles) and his girlfriend, Sarah (Jaime King). Ten years later, Tom’s father is dead and the kid inherits his mine. But once Tom returns to his hometown, the killing starts up again, and he quickly becomes the prime suspect. Is Harry Warden back in town? Has Tom taken up his mantle? Is 3D full-frontal nudity as good as it sounds?*


What makes My Bloody Valentine 3D really stand out from, say, the Texas Chainsaw Massacre and Halloween remakes is its 3D gimmick. It works really well here, with a vast amount of blood, guts, tinned food and pickaxes being hefted at the screen with gusto (although nothing to better the Lionsgate logo that kicks off the film). It's far more entertaining than Avatar. It is, however, let down by a by-the-numbers story and shoddy acting from Jensen “one face” Ackles, who is steadfast terrible in every concieveable dimension.

In his chic gas mask and pickaxe, the Miner sports a look as iconic as Freddy or Jason. It's a crime that the man never got his own franchise. Despite there not being much or any variety to the kills (all pickaxe, bar maybe one), the killer is impressively menacing, with one scene in the supermarket (its fucking idiotic ‘why-didn’t-they-do-that-before’ denouement aside) being particularly standout in terms of thrills and tension.

My Bloody Valentine tries to inject a bit of mystery into the proceedings; there are three possible killers, all equally plausible. It’s a of bit half-arsed whodunit, but bless ‘em for trying anyway. Kudos must be given, too, for casting B-movie legend Tom Akins as the town’s retired Sheriff. It lends the movie a bit of authenticity and distracts from Jensen fucking Ackles and his stupid deer-in-headlights face.

But arguably the best thing about My Bloody Valentine 3D is the amount of blood, guts and grue on show. Even before the flick’s started properly, there’s been a relative bloodbath (with one particularly nice eyeball popping). It’s not a good film, by any means - but it is an entertaining one. If you looked up ‘popcorn entertainment’ in the dictionary, then you’d be sure to see a picture of Harry Warden in his miner’s outfit 3D NUDITY.

And why does your dictionary have pictures in?????

*Maybe, maybe and HELL YES.
1 son(s) of a thousand maniacs