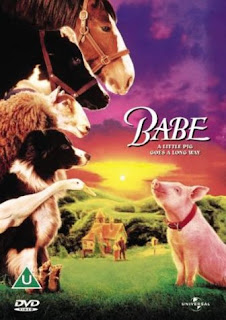 Director: Chris Noonan (1995)
Starring: Christine Cavanaugh, James Cromwell, Hugo Weaving
Find it: IMDB
An adorable pig (Cavanaugh) decides that he doesn't want to be bacon sandwiches and sets his heart on becoming a sheepdog. Sheep-pig. Farmer Hoggett (Cromwell) discovers Babe's surprising aptitude for sheep herding and trains the little fellow up to realise his dreams, entering him in a national sheepdog competition.
I watched Babe today with a hangover and it left me wanting a sausage sandwich. Don't think bad of me; cannibal films make me hungry too. In fact, most movies make me hungry. But if I was the sort of person who was easily influenced, Babe would have turned me into a vegetarian. It's a cute, amusing movie for all ages. Children have the talking animals and grown-ups can laugh at the fact that Babe was written by a man called Dick King-Smith. Haha, Dick.
Look, it has a baby pig go around calling a dog 'mom'. Ain't that cute. It's also a very existential movie. At one point, Babe asks "why are any of us here?" Deep. And its musings on the nature of things (things which don't appear useful get eaten) is a message all children should hear. Damn straight, if you're useless, you get eaten. Now go herd some sheep or climb a chimney. Make yourself useful.
How can one not love a movie in which James Cromwell bottle feeds a pig whilst singing 'If I Had Words'? It's really beautifully done, actually, and precedes Babe's very best joke. Hugo Weaving voices a grumpy dog. It makes his villainous roles in The Matrix and Transformers very difficult to take seriously.
Babe is a great movie. Even if it does always make me hungry. It should leave a tear in the eye of even the hardest-hearted individual. That'll do, pig.