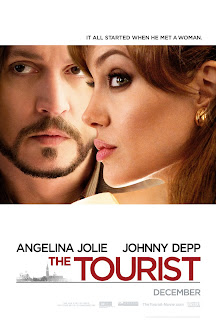 Director: Florian Henckel von Donnersmarck (2010)
Starring: Johnny Depp, Angelina Jolie, Paul Bettany, Timothy Dalton
Find it: IMDB
One of the more unpleasant moviegoing experiences of the past ten years. The Tourist is directed by somebody called Florian Henckel von Donnersmarck, and is exactly the sort of film that you'd imagine somebody called Florian Henckel von Donnersmarck might direct. It is an atrociously bad movie, attempting to do something stylish and European but instead it flounders and becomes a flowery, incomprehensible, smug self-consciously pretty affair.
Holidaying American Frank Tupelo (Depp) is visiting Italy, hoping to mend a broken heart. On a train, he crosses paths with Elise (Jolie) a fugitive on the run after doing something not very interesting but nonetheless illegal. Something to do with her criminal mastermind lover, who may or may not be 'The Englishman' (Rufus Sewell). She is pursued by cops Paul Bettany and Timothy Dalton. Frank and Elise dance around Italy looking pretty and aggressively flirting with one another. Pursued by the police and gangsters, there are rooftop chases and boat chases and a host of other scenes in which the characters are chased for reasons mostly unclear. At one point, Frank is chased across a rooftop in his pyjamas. Depp does his Jack Sparrow mince on a number of occasions, as well as the Jack Sparrow face and the Jack Sparrow voice. I fear Mister Depp has started to go native.
I watched The Tourist in the pursuit of sex, at the cinema. The Tourist was so rubbish that even she wanted to leave halfway through. We stayed, because I am a movie fascist and I never leave the cinema halfway through, sex or no sex (no sex, if you must know. The Tourist is so terrible that it causes impotence). The Tourist is the worst thing a woman has ever made me do, even worse than shaving my balls. Those hoping that The Tourist might offer a variation on Mr. and Mrs. Smith's sexy thriller will be very disappointed. The Tourist is neither sexy nor thrilling. Both Depp and Jolie act as though half-asleep or tranquilized, neither particularly interested in the stupid story and script. There's a ridiculous twist at the end, but not all that much worse than the preceding 100 minutes.
The Tourist made me want to never leave home again.