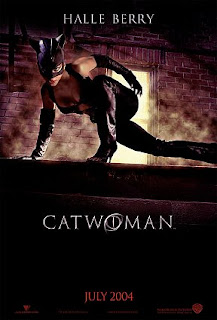 Director: Pitof (2004)
Starring: Halle Berry, Sharon Stone, Benjamin Bratt
Find it: IMDB
Mild-mannered graphic designer Patience Philips (Berry) finds herself embroiled in the midst of a corporate conspiracy and is murdered. But not even by Christopher Walken, who at least knew how to murder in style. Nobody in Catwoman does anything in style, which is odd, considering that over half of the characters are supposed to be involved in the fashion industry. Patience is killed and then resurrected by cats, who endow her with super cat powers. Indeed. Looks to me like somebody decided to bypass reading any Batman comics and instead take Tim Burton's stupid Catwoman 'resurrection' as an actual thing that could actually happen. Myself, I prefer to take Batman Returns' Catwoman origin story with a grain of salt. She just banged her head and went a bit mad. She doesn't have nine lives, she's just a bit resilient. If anyone can survive falling out of a window, it's Michelle Pfeiffer. Halle Berry looks like she'd have trouble opening a door.
Resurrected with her super powers, Patience reinvents herself as Catwoman and sets about trashing some guy's house just because he won't turn the music down. Then, wearing a truly ridiculous costume, she foils a robbery in progress and goes around doing dodgy CGI over ceilings.
Daredevil breathe easy, you no longer have the stupidest flirt-fight (or flirticuffs, as I refer to it whenever I randomly start attacking women in playgrounds). Daredevil had its blind lawyer battling Elektra whilst jumping about on playground equipment. Catwoman does exactly the same thing with a basketball game and a hot cop (Bratt). Meanwhile, Catwoman's fat comedy friend (see also: Jon Favreau in Daredevil) is hospitalised by toxic beauty products. This signals the coming of the plot, which somehow involves Patience's boss and Sharon Stone.
Even aside from the fact that Catwoman has nothing to do with anything, it's a terrible movie. Maybe even worse than Batman & Robin. Halle Berry isn't all that awful though. She's as good as Uma Thurman managed to be as Poison Ivy, which is to say that her being shit is mostly the film's fault. Benjamin Bratt is likeable, whilst Sharon Stone is amusingly bad. Unlike everything else. Which is just bad. Cat-astrophically bad.