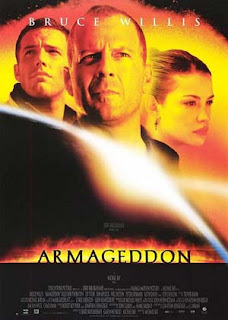 Director: Michael Bay (1998)
Starring: Bruce Willis, Ben Affleck, Billy Bob Thornton
Find it: IMDB
Don't ever let anyone tell you otherwise; Armageddon is one of the best action movies ever made. It is also one of the best romances ever made. That's right ladies, I'm a single man. And whilst it may well be because I consider Armageddon to be a fine example of romance, I prefer to think that it's because I haven't yet met the Liv Tyler to my Ben Affleck. What, I ask you, could be more romantic than playing animal crackers with the woman you love whilst Aerosmith's 'Don't Wanna Miss A Thing' is playing in the background? Nothing, that's what. Full disclosure: the reason my last relationship ended was because she wasn't happy with my habit of throwing animal crackers at her head and screaming in her face. "DON'T WANNA CLOSE MY EYES" (cracker) "DON'T WANNA FALL ASLEEP" (cracker) "'CAUSE I DON'T WANNA MISS A THING". I'd do this all the time, whilst a picture of Bruce Willis watched from a nearby chair. Animal crackers. Do not eat if seal is broken.
Mind you, if I was Liv Tyler and I was trying to get my sex on, the last thing I'd want to hear is my father doing the soundtrack. That's positively Freudian.
An asteroid the size of Texas is on collision course with our planet. Panicked, NASA boss Billy Bob Thornton tracks down top oil driller Harry Stamper (Willis) and his crack team of oil drillers. They want Harry and his friends to drill a big hole in the middle of the asteroid, drop a bomb down there and blow the thing to smithereens before it can touch our planet. This is a job that only Bruce Willis and his gang of adorable slobs can do.
Deep Impact take note; this is how you do apocalyptic action. Armageddon has the finest cast ever to grace an action movie. There's Bruce Willis, Billy Bob Thornton, Liv Tyler (this was during a rare period where Michael Bay was using leading ladies who could actually act), Owen Wilson, Steve Buscemi, Peter Stormare, William Fichtner, Michael Clarke Duncan, Keith David, Jason Isaacs and Will Patton, to name but a few. Everywhere you look, there's someone or something awesome. Unless you're looking at Ben Affleck.
Doctor Brian Cox (no, not that one) be damned, the science in Armageddon is complete bollocks. I don't know much about asteroids, but I'm pretty sure that they don't look like that. Or behave like that. In fact, no-one or anything behaves like everyone and everything behaves in Armageddon. I particularly enjoyed Steve Buscemi's space madness and the bit where Ben Affleck jumps over a crater with a moon buggy.
I first saw Armageddon at the cinema, back in 1998. I saw it with a large number of girls (not because I was some Cee-Lo Green ladykiller; my mother had enrolled me at some sort of youth group, and I was the only boy who ever turned up). Those who will say that Armageddon is not a good film are wrong. Every girl at that screening was in tears at the end. Tears on a par with Titanic or Jurassic Bark. Crying girls know their shit. Crying girls do not get this sort of thing wrong. Armageddon is one of the greatest screen romances of our time.
Sincerely, Armageddon, I do not wanna miss a thing.