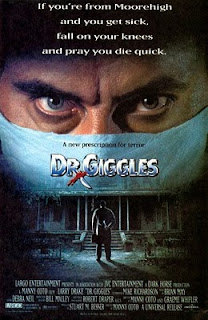 Director: Manny Coto (1992)
Starring: Larry Drake, Holly Marie Combs, Cliff De Young
Find it: IMDB
Manny Coto's Doctor Giggles belongs to the same subgenre of horror as those other classics The Dentist and The Stepfather, in that it takes an everyday figure and perverts it until it becomes something horrible. I like to think of all three serial killers relaxing in a nursing home together, reminiscing about serial kills gone by. It'd be like Bubba Ho-Tep, except Doctor Giggles keeps stealing medicine, The Dentist hates his dentures and The Stepfather keeps proposing to people. Also, they go on a killing spree and it's up to retired cops Ron Perlman and Ken Foree to save the day. Hollywood, sign me up anytime you like.
Maniac Doctor Evan Rendell (Drake) escapes from a mental institution and wreaks havoc upon a small American town. Poor Holly Marie Combs is his intended victim, chased by a scalpel wielding loon determined to give her a heart transplant whilst murdering and otherwise harassing her neighbours. All the while, giggling like an idiot and having flashbacks to his weird childhood. My favourite being the one in which a child version of himself cuts his way out of his dead mother's womb. Nice.
Dr. Giggles has been a holy grail of mine for some time now. Something of a rarity here in the UK, it exists only on Region 1 import and as one half of a double bill with a flick called Otis. Still, I managed to find a copy and was not disappointed. Much like The Dentist, it's a slice of nineties horror thick with much bad taste and cruelty. If Dr. Giggles was remade now, it'd doubtlessly become an identikit torture porno, sacrificing the cheesier kills in favour of people being tied down and dissected. Dr. Giggles offers its fare share of the latter, but is much better at the former.
Holly Marie Combs is actually pretty good in this movie. She doesn't suck too hard, I mean. I know, it surprised me too. But then, I'd only ever seen her in Charmed. Ahem, not that I ever watched Charmed. But none of the assorted cast really have much to do, since the whole thing is just a showcase for Larry Drake acting crazy. He's not quite on the same form as Darkman (another underrated classic of the nineties) but still owns Dr. Giggles, murdering and giggling his way through the movie as he does. The giggling gets rather annoying after a while (like an episode of Charmed) but otherwise Giggles is as great a psychopath as his fellow unrecognized not-quite-icons The Dentist, Maniac Cop or Harry Warden. There's not much mileage in the premise, but I'm glad at least one Dr. Giggles exists. Now, about my movie idea...