The Dark Knight Returns: Part I 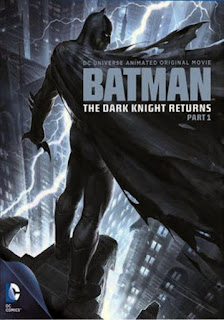 The best Batman movie of the year. There's a reason I haven't gotten around to reviewing The Dark Knight Rises yet, and that reason has something to do with Christopher Nolan's trilogy topper leaving me profoundly disappointed. The Dark Knight Rises is an okay comic book slash action movie, I suppose, but it's a sucky Batman film. In Christopher Nolan's Batman trilogy, The Batman has now spent more time retired than he has fighting crime. The Dark Knight's career effectively consists of him beating up some criminals, toppling a gangster, defeating the Joker and getting his girlfriend killed. Also, taking the credit for Two-Face's death. Still, I liked Bane, and the bit with the football field was good.

But wait, this is a review of The Dark Knight Returns, not that other thing. Batman (Weller) is retired again - although in this instance, he does deserve a bit of a rest after a good few years of crime-fighting. Jason Todd is dead, Dick Grayson estranged, and the city is overrun by a gang of criminals calling themselves 'The Mutants'. Bored and still harbouring serious anger management issues, Batman Returns to sort his city out. First on his to-do list: the re-emergence of Two-Face and the hiring of a new Robin.

The Dark Knight Returns made me feel exactly how I wanted The Dark Knight Rises to make me feel. I genuinely had chills run down my spine during the "operating table" line, as well as during Bats' initial return. He might look disconcertingly like an angry version of his Brave and the Bold self here, but this Batman is properly scary. Not since Batman Begins have we seen Batman really terrorise the fuck out of some unsuspecting criminals. This adaptation of Frank Miller's comic book is almost entirely faithful, save for a few wisely chosen moments which make Batman less of a dickhead. Namely the scene from the book, in which Batman uses a criminal's massive machine gun to blow the bastard away - this adaptation has him simply conk the bad guy on the head with it, which feels more consistent with the Batman we know and love. 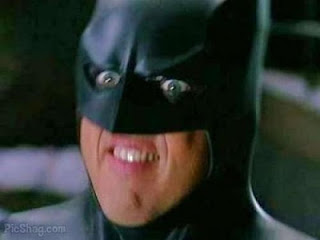 Except for maybe this one.


As with the other recent DC animated movies, it looks geat; very similar to Miller's artwork, except without the crap panels and occasionally dodgy anatomy. The voice acting isn't bad, although David Selby's Commissioner Gordon sounds a tad too old and doddery. There will always be those who say that Batman should be voiced by Kevin Conroy and no-one else, but I liked Peter Weller's crusty, understated version. The music is ace too, with a nice booming synth score which makes The Dark Knight Returns sound like an 80s action film.

Frank Miller may have gone off the rails recently, but this work remains as good as ever. I watched this as part of a double bill with Year One, and enjoyed both tremendously. Nobody does fascism fetishism like 80s' Frank Miller. I may never get an All-Star Batman and Robin adaptation (starring Charlie Sheen as the goddamn Batman) but The Dark Knight Returns (Part 1) will do quite nicely instead. 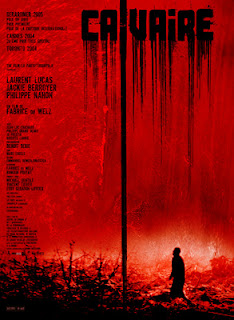 This Christmas, while others were rotting their brain cells with festive shit like Elf and The Grinch and The Muppet Christmas Carol (all of which I actually like) I found me drinking myself into oblivion and watching a French horror film about a cabaret singer who finds himself kidnapped by a mad farmer, dressed like a woman and chased around by the mad farmer's also mad love rivals. It's like Emmerdale meets Something Horrible. And yes, I'm aware that every time I watch a film about mad farmers I compare it to Emmerdale. I fucking love Emmerdale, all right.


Marc Stevens (Lucas) is the cabaret singer in question. Daniel O' Donnell and Cliff Richard should never watch The Ordeal, because this film would thoroughly make them shit their pants. Not that Cliff Richard would ever watch extreme French horror anyway. He's more of a Songs of Praise sort of fellow.

When his van breaks down in the middle of nowhere, Stevens is taken in by kindly-faced inn owner Bartel (Berroyer). Unfortunately, Stevens reminds Bartel of his missing wife, and he's less than eager to release the poor club singer. A quick bang on the noggin later, and Stevens finds himself tied up wearing a dress, while Bartel rants and raves about how his lovely wife is never going to leave him again. Luckily for Mark, it is a very pretty dress. So pretty that Mark proves to be very popular amongst all of the other locals too.

For all its violence and forced cross-dressing, The Ordeal follows the fairly standard Torture Film template. There's the sense of impending doom, the inevitable capture, the escape, the re-capture, the re-escape - then the bit where Anything Could Happen. Being a collector of 'extreme' cinema and having heard so many good things about The Ordeal, I found myself a little disappointed by the film. It's extreme, but not that extreme - a mite predictable and slow. Still, Stevens is easy to root for, and there's a nice sense of surrealism to some of the scenes. I particularly enjoyed the local pub and Bartel's dim-witted friend, Boris (Couchard). The Ordeal is a little unsettling, but never an Ordeal to watch, as it should be.

That said, it makes for great Christmas viewing. No, really, it does. There's a Christmas tree in it and everything. 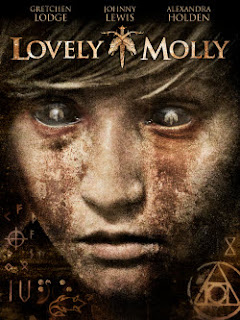 The director of The Blair Witch Project, Eduardo Sanchez returns with Lovely Molly, a spooky bit of horror which is less original and not likely to have as many fans, but thoroughly traumatising nonetheless. It must be said that I found his enormously influential signature piece to be somewhat overrated, so it's no surprise that I enjoyed Lovely Molly more than I did his debut movie.


Recovering drug addict and newlywed Molly (Lodge, who is fairly lovely) moves in with husband Tim (Lewis) to the countryside home where her dead dad used to live. Painful memories re-emerge, old druggy desires kick in again, and her foul father's mean spirit begins to make his presence known. Or does he? The threat at the heart of Lovely Molly is deliberately obtuse, refusing to commit to one thing or another. At times, Lovely Molly owes more to Requiem For a Dream than Paranormal Activity. There's a nice wink to Sanchez's beginnings in Molly's opening address to camera, reminiscent of certain scenes from The Blair Witch Project. The little handheld camera interludes are pointless, but not really pronounced enough to matter.

Lovely Molly? HORRIBLE MOLLY, MORE LIKE. I was left horrified by Lovely Molly and the movie's murderous, drug-addled nasty antics. Preachers are chomped, faces chewed, Tim abused and even some nudity and not in a good way. Well, maybe an okay way, but it's hard to get a good perv on when you're scared shitless of someone. It's why Grace Jones and I could never be together. Please don't hurt me.

The film is slow to get going, but once it does, Lovely Molly is incredibly gripping and nasty. I properly felt for Molly and her plight, even as she and the film slip into some very dark places. Lovely Molly? LOVELY MISERY, MORE LIKE. 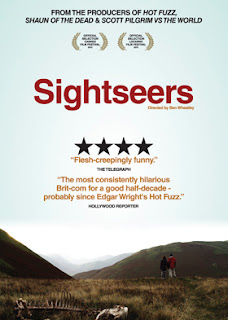 But not at all like any of those films.

At last, someone has made a serial killer road movie about my sort of people. That someone is Ben Wheatley, director of the headfuck hitman film Kill List. Those people to whom I was referring are Tina (Lowe) and Chris (Oram) - proper Brummies, complete with the accent. Are yow alright, am ya?

It's meet-cute in a Ken Loach kind of way. Chris and Tina decide to holiday together in his caravan, the former promising to take the latter on a "sexual odyssey", stopping off at some of Britain's finest sights (a pencil museum!) as they go. Well, there's only so much arse sex one can have. Only Chris has serious anger management issues, and frequently finds himself bumping off innocent people along the way. Thankfully Tina is more open to the idea of serial murder than most, and joins Chris in his killing spree. It's quite sweet, in its own little way. It also confirms my own private prejudice, that you should never trust anyone who wears a fleece.

Sightseers is laugh out loud funny without once compromising plot or character. It is, at times, shockingly crude and violent. There are jokes about everything from bum sex to (accidental) animal murder. And even as Chris and Tina violently slaughter innocent bystanders, they're such an adorable couple. The ending (although mildly predictable) is a little bit heartbreaking. Its beautiful soundtrack allows me to appreciate the 'Power of Love' again without having to condone that fucking awful John Lewis advert. Television adverts are not proper stories, people - even if they do emotionally blackmail you into buying shit from John Lewis. If you want to cry, watch Jurassic Bark instead. Ahem. But yeah, Sightseers has a great soundtrack.

It may not have appeared in many cinemas at all, but Sightseers is hands down funnier than anything that did this year. If you chose to see Breaking Wind or Adam Sandler playing a version of himself in a dress over this, well, congratulations on making the world a slightly worse place to live in.

Sightseers is the funniest comedy of the year, ay it.