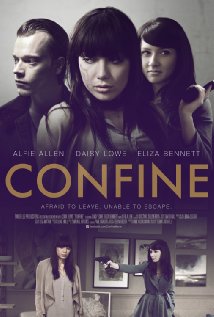 An agoraphobic ex-model finds her space invaded by an art thief and her partner in crime. Maybe she would have been able to run away if she wasn't wearing such stupid high heels and also agoraphobic. So commences a sparse British thriller starring an actual model and Lily Allen's brother, Alfie. I'm told Alfie is in A Game of Thrones now (then, so is the dude from off've the Tesco adverts, so that's not saying much) but I'm predisposed to hate anyone called 'Alfie', because, unless you are literally Michael Caine, that is not a name you are cool enough to pull off. Case in point: Shane Richie and Alfie Allen.


Daisy Lowe is fine as an actress until she actually has to speak. Her confrontation with an armed intruder is limp and said with the same conviction as I'd use, when saying "no, I don't mind doing overtime" or "sure, I'd love to listen to you tell me all about your boring-ass life." Eliza Bennett doesn't fare much better either. At least Lowe has an excuse - she's not a professional actress, after all. I had tuned in hoping for something like The Disappearance of Alice Creed, but Lowe and behold, that's not what I found. This is British filmmaking at its dullest and wearing a cockney accent.

At least our heroine is an obliging hostage, staying put despite the fact that her bonds are shite and silent even though her crap captors never bother to gag her. "WTF?" dim Henry exclaims, upon his arrival. WTF indeed. Soon Henry is all tied up too, in a hostage drama in which everyone's a hostage and no-one cares. It's a battle of wits amongst the witless. "What was that?" Kayleigh wonders, when Pippa finally attempts an escape. Bollocks, that's what. 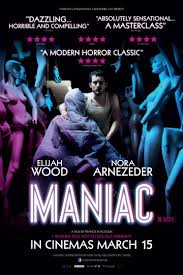 He's not sick, but he's not well. Frodo Baggins plays the maniac of the piece, mannequin collector and restorer Frank. Now, Elijah Wood doesn't look like a man that might be called Frank (few people do, Clint Eastwood and Frank Butcher aside) but he does look like a fellow who collects mannequins. I once helped sell some mannequins on eBay (not in a dodgy way, alright) and the men who turned up to collect them were all as dodgy as fuck. One man's eBay feedback is another man's sex offenders register. It's no mean coincidence that the creepiest episode I've ever seen of Criminal Minds involved a man who (sort of) collected mannequins.


Wood, meanwhile, has proven himself more than capable of playing outside of the Baggins box. Following his loony turn in Sin City and surprising chavviness in Green Street, I had him earmarked as a good psycho. With Maniac, he does an excellent job of fulfilling that potential.

Yes, it's a remake, but it's one of the good ones. I saw the original Maniac once, and don't remember anything but Tom Savini and being disappointed by it. With this Alexandre Aja written remake, I was most definitely not disappointed. Like Aja's Hills Have Eyes and Piranha remakes, it blows the original out of the water. It's the done thing to dismiss horror remakes offhand, but I think there are parties out there finally getting the formula right - take that basic template, add plenty of new elements and some new-fangled filmmaking techniques, and you may just be able to retain some credibility.

Maniac does more than most in that the story is told almost entirely from the killer's perspective: literally. We see the film through Frank's eyes, like some sort of (more) grotesque horror Peep Show. It could only have been improved by swapping Wood's internal monologue for David Mitchell's and playing a bit of Flagpole Sitta every now and then. There's even a moment where Frank stops and looks at himself in a shop window television. Tune in for series 9, in which Mark murders Jez and scalps Dobby for dessert. Maybe he is quite sick, after all. 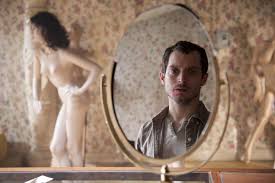 More so than the film upon which it is based, Maniac reminds me a lot of Donald Cammell's White of the Eye. It's psychedelic, highly disturbing and darkly amusing. The kill sequences are very nasty and well realised, Wood's performance cold and scary. He's well supported by Nora Arnezeder, playing the adorably cute apple of his eye. It loses the plot a bit at the end, but is otherwise great. It's one of the best slasher movies I've seen this year.