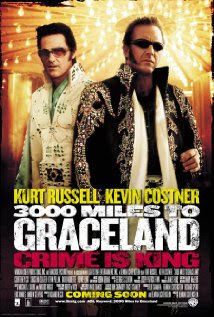 Director: Damien Lichtenstein (2001)
Starring: Kurt Russell, Kevin Costner, Courteney Cox
Find it: IMDB
Elvis impersonators botch a casino heist when Murphy (Costner) gets greedy and decides to keep all the money for himself. Michael Zane (Russell) hits the road and steals the money. But he doesn't count on the annoying Cybil (Cox) and her even more annoying son, who decide to tag along, hoping to bag themselves a share of the cash. Murphy, meanwhile, is not a happy Elvis, and sets about hunting down Zane with a vengeance. Despite the fact that it's his own stupid fault that everything went all Pete Tong.
3000 Miles To Graceland is an entirely underrated, often mocked action comedy that has at least one of its stars at his very best (that'd be Costner, who is actually good as the villainous Murphy). Kurt Russell (who actually made his movie debut in a John Carpenter Elvis movie) is a great lead. Courteney Cox is thoroughly annoying, but there are enough fun performances elsewhere to detract from that. David Arquette is a highlight, as are Ice-T and Thomas Haden Church.
The action scenes are well directed, tense, gory and explosive. Costner's increasingly eccentric Murphy makes for an oddly sympathetic villain towards the end, and the wardrobe department is quite wonderful. Well, if you like quiffs and sideburns. But who doesn't like quiffs and sideburns? It does tend to drag a bit though - at 125 minutes, it's a lot longer than it really needs to be, especially where the annoying romance is concerned.
3000 Miles To Graceland is a movie which starts with weird chrome Scorpions battling in the desert and ends with Kevin Costner and Kurt Russell dancing to an Elvis tune. 3000 Miles To Graceland, thangyewverymuch.