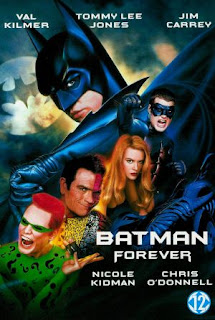 Director: Joel Schumacher (1995)
Starring: Val Kilmer, Jim Carrey, Tommy Lee Jones, Nicole Kidman
Find it: IMDB
The worst thing to be created by somebody called Joel since this blog. Although Batman Forever is generally considered a better film than its sequel, Batman & Robin, at least the latter film has consistency. It's consistently shit, granted, but at least it knows what it is. Batman Forever mixes the terrible camp of Batman & Robin with the gritty Gothicism of the Tim Burton films. It's as all over the place as the decor in Two-Face's hideout.
Batman (Kilmer) is still Batmanning, this time up against scarred ex-District Attorney Two-Face (Jones) and prancing green idiot The Riddler (Carrey). This film also introduces Robin (Chris O' Donnell) and love interest Chase Meridian (Kidman). Chase Meridian is only called Chase Meridian so that they can make the stupid "and what a delightful pursuit you are" joke.
Bruce considers giving up vigilantism and settling down with Doctor Meridian, a decision Robin is less than happy with, eager to avenge the death of his parents. The guy looks about twenty years old, but Bruce adopts him anyway. Meanwhile, The Riddler has invented a device that reads minds and Two-Face wears a series of atrocious suits. Every other iteration of the character realises that Two-Face was once District Attorney of Gotham City and is not all that bad a fellow, really. Batman Forever does not realise this. The only aspect of Two-Face's personality that the filmmakers get right is the fact that he flips a coin occasionally. 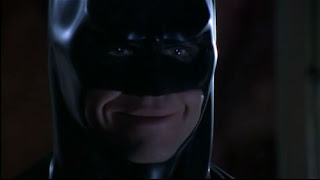 Val Kilmer is not a good Batman nor a good Bruce Wayne. He aims for the distant weirdness of Michael Keaton, but misses and comes across as bored and indifferent. There's a theory that Bruce Wayne is the mask, and Batman the real personality. Well in Batman Forever neither is at all convincing. He seems no more passionate about crime fighting than he is being a billionaire. That The Riddler's mind reading machine picks up anything more than static is quite impressive.
Once Batman's secret identity is uncovered by the villains (which seems to happen in nearly every Batman movie) The Riddler and Two-Face rock up at Wayne manor, beat up Alfred, blow up the Batcave and kidnap Doctor Meridian. Batman and Robin finally come together to rescue Chase and defeat the bad guys. Well, Batman does. Robin is immediately kidnapped by Two-Face so he can play Boy Hostage in the death trap next to Chase. There are a lot of death traps in Batman Forever, which recalls the days of Adam West and Burt Ward. Tommy Lee Jones's Two-Face really wouldn't have gone amiss alongside Caesar Romero and Frank Gorshin. He's a harmless goon. With nary a 'biff', 'pow' or even a 'sock', Batman saves the hostages, fries the Riddler's brain and makes Two-Face fall off a really high ledge. But at least he tries to save him, rather than vindictively tying a gargoyle to his leg and watching him splat on the pavement.
Batman Forever is a watchable film, but a terrible portrayal of Batman, Robin and Two-Face. Commissioner Gordon is still unrecogniseable. The Riddler fares slightly better, but the only person remotely fitting a character as we know him is Michael Gough as Alfred. I actually feel that he makes a better Alfred than Michael Caine. Not a lot of people know that.
Batman Forever? Well, not quite. Just one more film before they killed the franchise to sleep for nearly ten years.