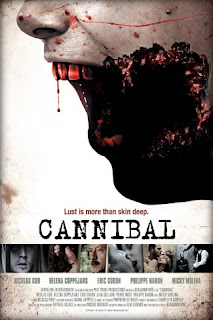 Director: Benjamin Vire (2010)
Starring: Nicolas Gob, Helena Coppejans, Jean Collard
Find it: IMDB
Pretentious, smug, annoying, unhelpful shit that can't decide whether to be talky, silent, black & white or colour. I get to sound like an idiot now for not enjoying Cannibal, but excuse me for wanting to actually see what is going on in my movies. Some may find it cute when you decide not to subtitle bits of the dialogue, but either subtitle all of it or none of it.
Cannibal is like an avant-garde version of The Woman crossed with Jet Li vehicle Unleashed. I thought both of those movies were enjoyable. I think Cannibal is only very intermittently enjoyable. That enjoyable part of the movie lasts roughly ten minutes. The rest is either incomprehensible or silly or horrible. Some gypsies have a pet cannibal woman called Bianca (Coppejeans) to whom they feed the losers of their cage fighting matches. One day they manage to lose Bianca in the woods, where she is found by agoraphobic ex-gangster golf fan Max (Gob). Max carries her home and adopts the little dear. Instead of attempting to civilise her, he cleans up after her murders and gradually begins to fall in love with the wee scamp. And then the gypsy gangsters turn up and kidnap her back. Poor Max decides to hunt down the gangsters and reclaim his love. Via the plot of Man On Fire and what I can only describe as The Sopranos' opening credits.
It's very clever that the film goes all black & white as soon as Max loses his darling Bianca. It's even quite charming when our hero kills a van full of gangsters and starts shouting things like "damn those black guys!" Unless, that is, you don't like film school cinematography and racism for the sake of racism. Damn those Belgian guys. There's also gangster rap on the soundtrack, and gangster rap is always inexcusable unless your name is Attack The Block.
Furthermore, I cannot take seriously any character called Bianca, let alone one that is supposed to be at once sexy and scary. People called Bianca are generally not hot, sexy cannibals. People called Bianca generally look like this: 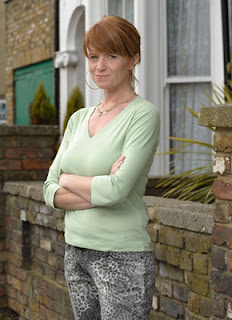 Not scary or sexy. No offense to anyone called Bianca. But I found it incredibly distracting anytime anyone said "where's Bianca?" or "hello Bianca", because I kept thinking of the horrible ginger face above. No offense to anyone with a horrible ginger face. Whilst there's some good gore and some good action and a funny scene in which a man hangs a spoon off his nose, the rest is all too cloying and pretentious.
Cannibal is a stupid film that spends too much time pretending to be clever and not enough time actually being clever.