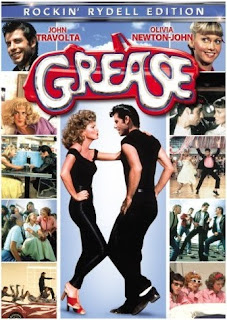 The greatest musical film of all time. Yes, even better than South Park. Virginal good gal Sandy (Newton-John) falls for greaser Danny Zucco (Travolta) over the course of one dreamy summer. It happened so fast. They had themselves a blast. But as summer drew to an end, they found their dreams ripped at the seams. Oh, those summer ni-ights. But no, because Sandy and Danny run into each other at the start of the new term. Sandy notices a change in Danny though. When he's around his guy mates, he's kind of a dick. Can they rekindle their romance?
Of course they can, even if it happens via Sandy turning herself sluttish and dancing up a storm whilst Danny looks on, the chills running through his body practically electrified by the power she's supplying. Personally, I preferred Sandy as she was before the leggings and massive hair. Hair which can never hope to compete with John Travolta's beautiful quiff. If there's one thing that fuels a good man-crush in me, it's a good quiff. And John Travolta's is a very good quiff. Of all the movies I've ever watched, Grease made by far the biggest impact on my head (the rest, Jeff Goldblum in Jurassic Park).
Every single one of the songs in Grease is a party anthem, guaranteed to get me on the dancefloor; the best being 'Summer Loving', 'Greased Lightning' and 'You're The One That I Want'. Bring on the Grease megamix. It does indeed give me chills and they do indeed multiply. Quite simply, Grease is the word.