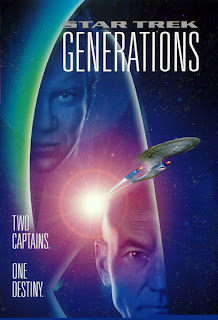 Director: David Carson (1994)
Starring: Patrick Stewart, William Shatner, Malcolm McDowell
Find it: IMDB
The first Star Trek movie to star the Next Generation crew. Film traditions being as they are, there has to be a passing of the torch moment. This comes in the (now rather chubby) shape of William Shatner's Captain James T. Kirk saving the day. This comes in a roundabout sort of way, with Kirk being sucked into a magic wormhole and disappearing, presumed dead.
Years later, Captain Picard (Stewart) and his crew receive a distress call from a solar laboratory. Everyone is dead, save for Doctor Tolian Soran (McDowell) who has some sinister plans for the Enterprise and its crew. He too wants to be sucked into Kirk's magic wormhole, an energy ribbon called 'The Nexus' where dreams come true. In Kirk's case, this is chopping logs and riding horses. McDowell outwits everyone on The Enterprise, which is not a difficult feat - The Next Generation's crew are a notorious bunch of halfwits - and manages to find his Nexus. He gets himself and Picard sucked in to live happily ever after.
Only not. With the help of Whoopi Goldberg, Picard escapes, enlisting the help of Kirk along the way. There's a beautiful bit where Kirk says to Picard "I was saving the galaxy while you were in diapers." To a Trekkie like myself, the meeting of Kirk and Picard was a big deal. Like, a Freddy Vs Jason or Avengers big deal. To this day, Generations makes shivers run down my spine. At least, until the final battle it does.
It goes to the great effort to bring Kirk back, and then visits upon him the crummiest death this side of Sayid in LOST. James Kirk - Starfleet legend and hero of years of Trek TV and film - dies falling from a bridge. It's even worse than Data's own demise in Nemesis. And then Picard leaves him on that distant planet, buried beneath some rubble and a rockery. Little wonder Shatner keeps trying to write himself back into continuity. Hopefully JJ Abrams' new Star Trek timeline will grant Kirk a more worthy death. That said, I would quite happily watch Chris Pine fall off a bridge, repeatedly.
Generations is otherwise a fine bit of Trek. It depends on one's tolerance for Star Trek, Whoopi Goldberg and The Next Generation crew, and requires some pre-existing knowledge of the characters, but I loved it. Well, apart from the bit where Captain Kirk falls off a fucking bridge and dies.