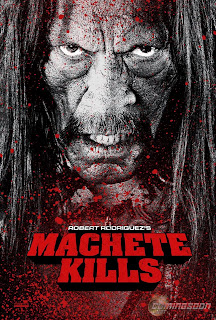 Well, it's about time. After not killing much of anything in the disappointing Machete, Danny Trejo's titular wrong Mexican strikes again, this time battling Mel Gibson, a schizophrenic dictator and a veritable army's worth of hookers, hitmen and hired mooks (including, inexplicably, Lady Gaga). While Trejo's Machete does get to live up to his name a little more than he did in the previous film, Machete Kills still manages to be an even bigger disappointment than its predecessor. Can't Robert Rodriguez go back to making real films already?

Trejo is as entertaining as ever as Machete, but there's no hiding the fact that the joke is wearing a little thin by now. I love a bit of ironic Grindhouse as much as the next Planet Terror fan (the last decent film Rodriguez made) but there's only so much nudge nudge, wink wink, it's shit on purpose a guy can take. Where the first Machete was flawed but amusing, this sequel borders on unwatchable. I was fed up of it by the time its opening gambit had finished - and unfortunately, there was a whole lot more of it left to come after that. Machete jogs from one ludicrous set piece to another, notching up a hefty bodycount, meeting Mel Gibson and even boning Amber Heard as he goes. That sounds fun, but it's oh-so very tiresome. Almost everyone puts in a decent performance, but it's so layered in pastiche and artifice that it's almost impossible to enjoy any of it.

CGI gore, Lady Gaga and a fight between a blind person and a villain that was better when Rodriguez did it the first time around, with Johnny Depp. Gibson fighting Trejo with a Klingon blade and driving about in a little shuttle from Star Wars. The complete waste of Walton Goggins, Antonio Banderas and Cuba Gooding Jr. (the latter made even more depressing because it was the only time I have ever enjoyed Gooding Jr. in a film). The stupid James Bond/Austin Powers ending. The inexplicable decision to give that ending away before Machete Kills had even started. The fact that Machete got a sequel while Dredd didn't.

I know it's supposed to be, but Machete Kills is awful. It takes a great cast and not-bad concept, and spends the whole film wasting it all. Guys - you tried, but the joke just isn't that funny anymore.

I Spit on Your Grave 2 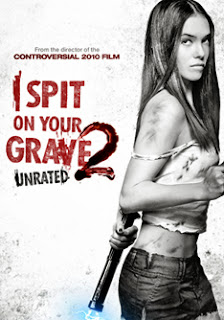 An aspiring model replies to an advert she finds posted on a wall. Text a photo of yourself to an anonymous Nico Bellic voice motherfucker, for a free photoshoot? Sounds legit. It's the sort of advertisement that's ten-a-penny on Gumtree or Craigslist, and a plausible setup for an I Spit on Your Grave movie... of which there are now three, counting Meir Zarchi's original video nasty.

"Aaaaargh!" you scream, outraged, "a sequel? Profiteering from our rape culture, much?" And while you wouldn't be wrong, if so many of you (maybe not you personally... I'm sure you have better taste than that) hadn't paid to see the remake, we wouldn't be here, and nor would I Spit on Your Grave 2. Zarchi, for all his film's faults (being terrible, chief among them) had intended I Spit on Your Grave as a warning; an anti-rape piece. The remake and its sequel exist only to make money. There's no message to them (apart from maybe, the obvious keep the fuck off've Gumtree) only exploitation, pure and simple. Judging by the fact that the remake made enough money to justify a sequel, well, it looks as though that worked, didn't it?

As an exploitation film, then, I Spit on Your Grave 2 does what it does very well. It's one of the most unpleasant movies I have ever seen, aided by an all-too realistic performance from lead actress Jemma Dallender. Bleak, moody and atmospheric, it certainly looks the part. It's not remotely scary but, then, it was never intended to be. But the problem we have is the same as the previous two instalments suffered from - as soon as the rape part of this rape/revenge tale is over, everyone seems to lose interest. Katie's vengeance feels tacked-on and perfunctory. A guy is drowned in a toilet, though, which is always amusing. 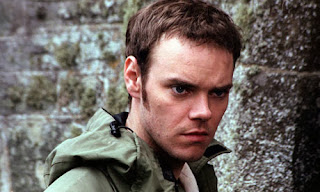 Warning: this paragraph spoils the film's ending. Look, if you're going to make a revenge movie, you should at least try to ensure that the revenge is more powerful than the initial crime, otherwise it just makes your protagonist look like an amateur. Here, it underlines the futility of revenge, but I doubt that was the statement the filmmakers were trying to make. To add insult to injury, a man turns up at the end and saves Katie's life, killing the Nasty Man for her.

I Spit on Your Grave 2 is a thoroughly effective exploitation movie. Ugly, offensive and lacking in artistic merit, it's the most worthless instalment yet.