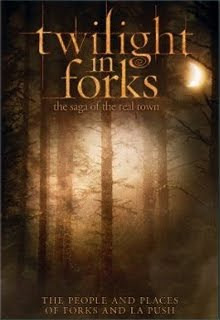 Director: Jason Brown (2009)
Starring: None of the stars of Twilight.
Find it: IMDB
This bit of the review I wrote during the first half of the film:
(I was sober)
Mentally deluded people talk about sparkling vampires as if they're real and document the history of a town called Forks. I would make fun of the people in this documentary, but that is making fun of people with learning difficulties, and making fun of people with learning difficulties is not funny. "It could happen." Uh, no it couldn't. People talking about the film as though sparkly vampires and werewolves exist really pissed me off.
Somebody has the temerity to call people who like comic books "geeks" and compare Twilight to Star Wars, Star Trek and Lord Of The Rings, insulting all of fandom and calling most nerds angry. HOW VERY FUCKING DARE Y- oh, right.
But he doesn't seem to realise that Star Wars, Star Trek and Lord Of The Rings are actually good. He then suggests that being a guy and liking Twilight will get you laid. There are a lot of good quotes in Twilight for those who enjoy mocking Twi-hards (or Twi-aholics as one girl refers to herself).
"I'm embarrassing myself right now." Yes you are. "I'm 46 years old and I'm hanging around with a bunch of kids". Make of that what you will. "Who doesn't love a good love story?" Twilight is not a good love story. "Since you've read the book, I've noticed a difference in the way you talk to me." Twilight turned a man into an abusive husband. He bleaches his hair blonde so as to look like Carlisle, because his daughter told him to. I would mock, but I once bleached my hair to look like Spike from Buffy. Well if you're going to make yourself look like a vampire, you might as well do the best one.
A man who is in a band talks about how he thinks Twilight is awesome. Needless to say, that band is not Muse. Even the people who are in Twilight don't think that Twilight is awesome. Everybody in this documentary thinks that Twilight is awesome. It is very biased.
This part of the review I wrote during the second half of the film:
(I had just drunk half a bottle of Grant's whiskey)
Like every good documentary, I did learn some things from Twilight In Forks. I learnt that Forks is a real place. I learnt that Stephenie Meyer and her terrible novel saved the town from bankruptcy. I learnt that Twilight fans are actually quite nice. Nicer than some Star Trek fans or me. In fact, as Twilight In Forks progressed I actually came to feel quite bad for being such a bitch about Twilight in the past. I'm sorry Twilight. I would definitely consider visiting Forks one day.
(But not drunk enough)
That said, I couldn't watch the film all the way through, because Twilight fans give me a headache. It sounds quite tiresome to be a resident of Forks. Especially if you're a Native American Indian, in which case people accuse you of being related to a hunky werewolf.
I wrote this punchline whilst I was still sober:
Forks off.
This score I calculated whilst I was drunk:

This one I calculated when I sobered up: