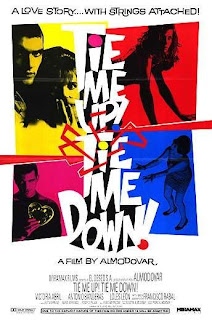 Director: Pedro Almodovar (1990)
Starring: Victoria Abril, Antonio Banderas, Loles Leon
Find it: IMDB
Antonio Banderas; making Stockholm Syndrome sexy since 1990. Tie Me Up! Tie Me Down is a romantic comedy about a man called Ricky (Banderas) who is released from a mental hospital and tries to convince an old flame and pornstar to be his wife. Marina (Abril) is less than keen, so Ricky ties her up whilst he tries to change her mind. Not in a rapey way, alright.
Antonio Banderas, you can kidnap me anytime. Well, not really, I'm more of a dom, but if I was going to let any man do that sort of thing to me, it'd be Antonio Banderas. Who knows, I might even fall in love with him like Marina does. Tie Me Up! Tie Me Down, granted, sounds more like the plot of a thriller or horror than it does a romantic comedy. But it's sweet in the same way as A Life Less Ordinary (a very underrated Danny Boyle romcom) and is a very feisty, sexy movie. It's not even misogynistic, which you might expect from a piece about a man who makes a woman love him by tying her to a bed and gagging her face. But this is from the mind of Pedro Almodovar, a man who knows his strong women.
Look, if I'm going to watch a romantic comedy, I might as well watch one with copious amounts of (eventually) consensual bondage and Antonio Banderas being manly and awesome. True story, I once wrote a girl a love poem. In the fourth couplet were the lines "Stockholm ain't just a place/she should have bought some mace" (and yet my heart still ended up broke like Greece, so I ask you who the real dom was in that relationship). That in mind, yes, Tie Me Up! Tie Me Down is a great romantic comedy.