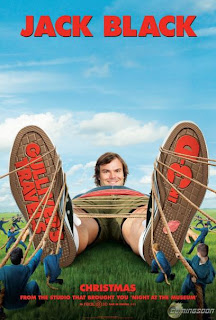 You know, people who made this movie, you probably should have told your poster designers that Gulliver's Travels is not a horror flick. That poster above is the most horrifying image I have ever published on the Horror Review Hole. Is it even physically possible for one's head to come up at that angle? I'd argue it as the most horrifying image on the web. Give me goatse or blue waffle any day. I'll give you a moment whilst you google blue waffle.
Gulliver's Travels is easily more horrible than blue waffle. Lemuel Gulliver (Black) works in the mail room at a busy New York newspaper. In an attempt to move up in the world, he manages to bag himself an assignment as a travel writer for editor Darcy (Amanda Peet), who sends him off in a boat to the Bermuda Triangle. Gulliver's boat is caught in a dodgy CGI version of The Perfect Storm and he is shipwrecked, washed up on the shores of Lilliput. I shall be honest. I was as disappointed with Gulliver's Travels as I was when I watched Paradise Lost expecting a bit of Milton. I doubt that when Jonathan Swift wrote his Gulliver's Travels, he had Jack Black in mind, pissing all over house fires and James fucking Corden. I am aware that Swift had a bit of a pottymouth and wasn't above the odd toilet joke, but Jack Black pissing all over a bunch of slumming-it British comedians can't be what he'd intended.
That said, I wouldn't mind seeing A Modest Proposal adaptation, in which Jack Black goes to Ireland and eats their children. Gulliver's Travels honestly reminded me of Salo, so a little bit of Irish baby-eating would hardly go amiss. Anyhow, Jack Black's co-stars fare a lot better here. Jason Segel exudes likability as Gulliver's Lilliputian BFF, whilst Chris O' Dowd is simply wonderful as the villain. I say villain, he's actually the hero. If you watch Gulliver's Travels from General Edward's (O' Dowd) point of view, you'll see it as the story of a professional gentleman who, whilst attempting to protect his countrymen from a giant farting idiot, is usurped, ridiculed and loses everything he has; from his job to his fiancee (Blunt).
Gulliver's Travels turns Lilliput into a city of nightmares; more or less ruled by an enormous Jack Black who is literally everywhere, from billboards to theatre. It's no small wonder that General Edward tires of the enormous slob so quickly. Most of us grew fed up with the man five minutes after that one time he was good in High Fidelity. Ultimately, Gulliver's Travels is the sort of film that ends with a dance montage. Feel free to add or remove Screaming Scream Queens below as per your tolerance for Jack Black and his giant-sized shtick.