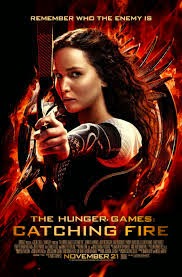 While I enjoyed the madly popular, Twilight-for-intelligent-people, Battle Royale-for-dummies film The Hunger Games a lot more than I thought I would, I was in no hurry for a sequel. Interesting as the premise was, pretty as it looked and well-acted as it might be, it was all a little toothless for my tastes. Still, when Catching Fire rolled about, I had no qualms about settling down for another two-and-a-bit hours of pretty teenagers murdering one another in the jungle. The three or four beers I had beforehand might have helped.


But no beers are required to enjoy Catching Fire, a more confident, mature piece than the film which preceded it. The Battle Royale comparisons are shed as the story blazes its own trail, in the process becoming a much better sequel than the maligned Battle Royale 2 (which I have seen two or three times but still only vaguely recall). There's still no gore, the characters' names are as stupid as ever, and there's too much CGI, but all it feels much less childish this time around - perhaps thanks to the more pronounced political element.

The lovely Donald Sutherland's President Snow gets a bigger part to play in this outing, as well as the introduction of Philip Seymour Hoffman's slimy Gamesmaster (has poor Hoffman ever played a character whose introduction couldn't be preceded by the word 'slimy'?). Elizabeth Banks (sigh), Woody Harrelson (also sigh), Stanley Tucci and Lenny Kravitz also return in their respective roles, and are great. It's obvious that it'd be Katniss and Peeta returning to the games, but I'd be lying if I said that I didn't want to see the adventures of Woody Harrelson in the I'm a Celebrity jungle. Still, great as the adults are, this is the kids' show. I shall have to wait another day for my Haymitch prequel.

Thankfully, Lawrence and Hutcherson don't disappoint, more than capably holding the screen on their own. Fuck that Gale guy, though. Consider me firmly on team Hutcherson. His gormless brand of dim, semi-unrequited hunk is simply adorable, like a puppy or dopey giraffe.

Even for adults and those who haven't read the books, Catching Fire is a great watch. I found myself surprisingly invested in the story, even going so far as to get a little emotional at times. For everyone else, there's a kid running around with a trident (if Jack Quaid doesn't get an Aquaman movie, I'm calling bollocks), angry monkeys and Donald Sutherland looking like he wants to execute everything all the time.

Where I left the first Hunger Games with a sheen of mild indifference, I find myself eagerly awaiting the next Hungry Game. Please sir, can I have some more?