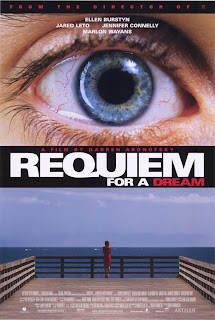 Director: Darren Aronofsky (2000)
Starring: Ellen Burstyn, Jared Leto, Jennifer Connelly, Marlon Wayans
Find it: IMDB
Drugs are bad, mmm'kay. Requiem For A Dream is a movie that I've seen frequently top "most depressing films of all time" lists, piquing my curiosity on many an occasion. A bit of cinematic misery can be good for the soul sometimes, so I approached Requiem hoping for the next Jurassic Bark or death of Buffy episode. Requiem For A Dream is very depressing. Shockingly so, sometimes. But still I was left disappointed. Maybe it's because I've seen the worst of the worst. Maybe it's because I'm an emotionless shell. Maybe it's because I've never tried drugs nor particularly liked the druggies I once called friends (if you can call someone who sits in a field on a cold winter's day smoking weed a 'druggie'). But Requiem For A Dream left me with little more than an indifferent "huh."
Still, I will never mock the acting powers of Jared Leto or Marlon Wayans again. Wayans is revelatory, although I have only ever seen the most obnoxious of his works (the admittedly enjoyable Scary Movie, the shit Little Man and White Chicks). His Tyrone is a completely serious character, and Wayans works it very well. Jared Leto is good as Harry. '30 Seconds To Mars' are still shit, but I'm less inclined to sneer at his acting output in future. Jennifer Connelly is as great as ever as Harry's girlfriend, Marion. But the most tragic of the stories is that of Sara (Burstyn) who becomes addicted to a mix of weight loss pills, antidepressants and an overriding desire to be on TV. A TV which Harry keeps stealing. Whilst the Harry, Tyrone and Marion storyline is very much 'drugs are bad' infomercial material, Sara's is simply horrific.
Through Sara's gradual physical and mental disintegration comes some of the most weird and disturbing imagery this side of a Takashi Miike film. At times, Requiem For A Dream is more unsettling and upsetting than many a horror movie. Its brand of body horror certainly wouldn't go amiss in a David Cronenberg piece, particularly Jared Leto's purple arm and Jennifer Connelly's later sex scenes.
And yet I expected it to go further. So much has said about the power of Requiem For A Dream that now it can't help but underwhelm slightly. The victim of too many "most depressing films of all time" features, I expected something spectacularly gruesome from its finale. Instead, there's something miserable but not unexpected. Maybe it's par for the course for a horror fan. We've seen Martyrs and Serbian Films.
Requiem For A Dream is a powerful movie, exceptionally well-acted and directed, and guaranteed to stick with the viewer for a long time afterwards. If nothing else, there's Clint Mansell's Orchestral track, which is completely and utterly one of the most beautiful things ever to be set to film. Whenever anything remotely crap happens in my life, this is the song I'll be listening to.