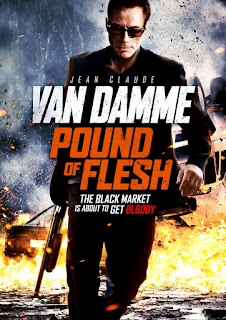 You don't know it until you stop and think about it, but of all the old guard action heroes, the one doing best for himself - critically, at least - is the Muscles from Brussels himself, Jean-Claude Van Damme. Sly Stallone may have his Expendables franchise and Schwarzenegger his Terminator sequel (not to mention the promising Maggie and fun misfire The Last Stand) but none have been so quietly doing such good work as Van Damme, building up a fine collection of offbeat genre pieces and deftly cast little roles. JCVD, for instance, or the brutal In Hell. That's not even counting his film-stealing turn in The Expendables 2 or his wonderful beer adverts. Jean-Claude Van Damme may be few people's favourite action man, but there's no denying that he's one of the more versatile. Well, he tries to be, anyway.

His Straight to DVD latest is Pound of Flesh, a film best described as Taken, but with a kidney instead of Liam Neeson's daughter. Or The Merchant of Venice with... no, I can't even finish that sentence, not even in jest. Giving us a glimpse into what would have happened if Urban Legend had starred an aged action hero instead of a gaggle of dim college students, Pound of Flesh opens with poor Deacon (JCVD) naked and confused in an icy bathtub, missing a kidney. Complicating matters is the fact that Deacon's kidney was already promised to a dying relative, giving the miserable muscleman little choice but to hunt down his organ and the bastards who stole it... before it's too late.

The story is backed up by some decent action, including plenty of people being kicked in the face by Van Damme. The highlight being a bit of literal Bible bashing as Deacon doles out some serious Van Dammage to a gang of goons in a nightclub, using a Holy Bible as his weapon. The acting is surprisingly good too, with JCVD making good use of the glum actorly chops he displayed in JCVD and In Hell. It's too serious for its own good at times (occasionally playing like a morose old Crank) and its low-end budget is evident, but it's far more watchable than most films of its ilk these days. Rather this than anything Steven Seagal has done since, um, Machete, or yet another listless Taken sequel.

Look, it's not Shakespeare, but Pound of Flesh.... no, I still can't. It's Taken, but with a kidney and Jean-Claude Van Damme braining people with a Bible. What more do you need? 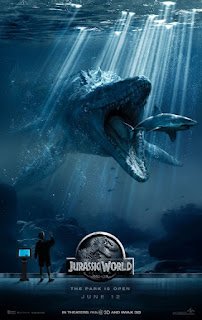 As a male human being of not-quite-thirty with reasonably good taste in movies (okay, that last point is debatable) there's a part of me which is predisposed to always adore Steven Spielberg's Jurassic Park; the summer blockbuster of my era. Marvel's Avengers and Independence Days may come and go, but for me, Jurassic Park will always be the one. With that in mind, its sequels have a lot to live up to.

Lost World managed it, but that did have Jeff Goldblum, the clifftop trailer sequence and my youth on its side. Also, it is genuinely good (shut up, it is). Jurassic Park III, less so. Jurassic World? To say I have mixed feelings would be an understatement. In Jurassic World, John Hammond's vision is up and running - a living, breathing, working Jurassic Park with attractions, a petting zoo and a Pandora outlet. It's been years since the last dinosaur attack, and the world is now not only used to the (re)existence of dinosaurs but bored of them too. "Bigger, scarier... more teeth," is the abiding mandate from new boss Simon Masrani (Irrfan Khan). Hence the creation of its newest attraction - the man-made Indominus Rex (iRex, geddit). Suffice to say that Ian Malcolm would have a field day with this one.

It's no secret that Jeff Goldblum in Jurassic Park is responsible for at least 60% of the way I dress - and have dressed since I was old enough to say things like "fuck you mom, I want leather trousers" - and his Ian Malcolm remains among my top five movie characters of all time. Chris Pratt as Jurassic World's leading man feels like a good fit, then, seeing as I bought a red leather jacket and grew a face full of stubble just so's I could pretend Star Lord from off've Marvel too. Alas, this film does the actor few favours, giving him little to do beyond audition for Indiana Jones by rolling under a door and act like a creep towards Bryce Dallas Howard. He shouldn't feel too badly though: Jurassic World does nobody any favours, being a movie full of people that it's impossible to like. It's as though the six (six!) credited writers looked at that bit in Jurassic Park where Grant was a dick to kids, Malcolm hit on Ellie Sattler all the time and Tim and Lex were a pain in the ass, and just decided to go for their own approximation of that. Hence the parent divorce subplot and tacked-on family schtick, which feels more like an attempt to be Spielbergian rather than having its own reason to exist. 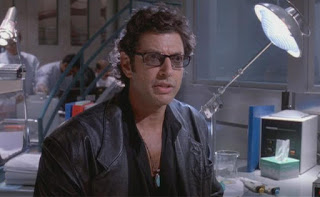 The story isn't much better, pulling in several different directions all at the same time, insisting on plowing ahead with bad ideas like military dinosaurs, iRex and Raptors being friends with Chris Pratt. Although, since all the characters constantly comment on what a terrible idea everything is, it does seem as though the filmmakers are aware of this too. It's a film that expects us to be awed by its dinosaurs at the same time as telling us that people are now bored of dinosaurs - two very different ideas, one of which does not sit well next to John Williams's majestic score.

At least the dinosaur attacks are on point, being remarkably cruel at times, for a family-friendly film. Its strikingly nasty Pteranodon attack brought me the movie's only belly-laugh (but what a belly laugh it was) while the Raptor attack sequence makes up for their mishandling elsewhere. The return of Henry Wu is welcome, while Howard does a sterling job with what little she has. Accusations of sexism aren't entirely inaccurate, but it does redeem itself somewhat with a good subversive gag for Lauren Lapkus (of Orange is the New Black fame).

It all falls apart again for the final fight - which is honestly even stupider than that of The Lost World - but at least looks good while it's doing it. Jurassic World isn't a complete waste - were I twelve or thirteen again, I would have loved this film. But then, thirteen-year-old me wore leather trousers, so what do I know. 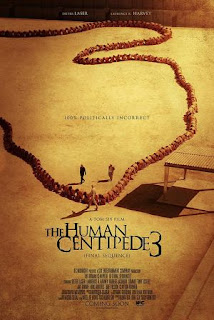 Fair play to director and series creator Tom Six, having made three Human Centipede movies now, each time in the sandbox of a different genre slash style. Where the first one was a relatively silly backwoods body horror film (played fairly straight), and the second a black-and-white arthouse torture thing (played far too straight) the third... well, I'm not entirely sure what The Human Centipede III is, but it's definitely its own thing, to be sure. What it definitely isn't, is played straight.

This second sequel exists in a universe in which The Human Centipede 1 & 2 are fictional movies, which the characters can and do watch as entertainment. "Haw haw haw," I said (paraphrasing) in my original review of The Human Centipede II, "the funniest idea in this is the thought that anyone could ever develop an obsession with Tom Six's terrible movies!" Well, that turned out to be a load of hot nonsense, given my subsequent discovery of Fetlife (not that I would know what that is) and people who most definitely are obsessed with Tom Six's terrible movies. Again, fair play to Tom Six, I guess.

While the previous two entries definitely had a sense of humour, Six's Final Sequence swings the balance almost all the way to comedy, no longer even remotely pretending to scare people and only playing the gross-out schtick at half-mast for the most part. As sadistic prison warden Bill Boss, shaven headed gurning Dieter Laser is so loud and broad that even Will Ferrell might cringe at his antics. At times, it feels like more of a Movie Movie style approximation of a Human Centipede than it does a Human Centipede in its own right. Sadly, like its acquired taste horror, its comedy strikes just as wide of the mark on most occasions. Unless, of course, rape is hilarious, in which case The Human Centipede III is very funny indeed.

In setting the film inside a prison and constructing its centipede from 500 (!) inmates, there is more satire and social commentary than one might expect, even if it is of the mostly incidental variety. Real-life imbeciles who celebrate prison rape as a form of 'justice' or a joke should be okay with Bill Boss's plan to revolutionise the system by housing his inmates within the boundaries of a shared digestive organ. Right-hand man Laurence R. Harvey isn't much better, balking at Bill's cruelty but himself coming up with the centipede idea (with credit to Tom Six, playing himself... badly). How much cruelty, the film asks, is too much cruelty when it comes to our nation's prisoners? 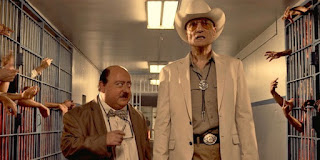 That's framed within an incessant cavalcade of violence, torture and grotesque bodily transgressions. There's nothing on the same level as the previous film's sandpaper wanking or newborn squishing car escape sequence, but there's enough to turn most stomachs during its more intense moments. Those moments, however, seem few and far between, with the rest of the film more concerned with Laser's mad ranting and raving. A puzzled Eric Roberts briefly brightens the mood in his bookend appearances, while there are a few familiar faces among the supporting cast (most notably the big dude from The Dark Knight who threw the bomb detonator off've the boat) to keep it from getting entirely bogged down in its own arsehole-gazing. There's no hiding how surprisingly dull the film is though, running on a lack of ideas and excess of ego.