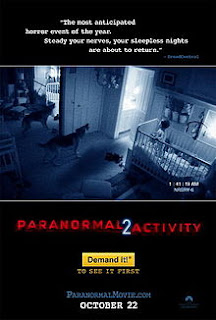 Director: Tod Williams (2010)
Starring: Brian Boland, Molly Ephraim, Katie Featherston
Find it: IMDB
The continued saga of one family's unhealthy obsession with video cameras. Neither a prequel nor a sequel, Paranormal Activity 2 sees a rich family's oversized house terrorised by a door slamming, baby levitating demon. Paranormal Activity 2 is a terrible sequel, a terrible movie and full of unintentional moments of laugh out loud comedy.
Paranormal Activity, despite a few faults and a horrible lead character, is a thoroughly effective, chilling bit of spooky horror. It's one of the few movies to have an effect upon me. Mostly, I'll sit before even the goriest of horror films and go "huh" or "well." With Paranormal Activity there is this genuinely unsettling feel and a quite impressive atmosphere, all tension and terror. Paranormal Activity 2, however, does not once achieve any sense of tension or scares. It feels like a cheap imitation of the first movie, its parlor tricks diluted by repetition.
The action moves from the house of Katie (Featherston) to her sister's home, where baby Hunter has just been born. Hunter is a stupid name for a baby. Unless preceded by the names "Kraven The", nobody should be called Hunter. It's a form of child abuse. But baby Hunter has worse to contend with than just his stupid name. The demon haunting his house (or more accurately, his mother and aunt) is acting up, slamming doors, locking people in basements and levitating the poor wee child all around his cot. I've a feeling that the scene in which Hunter is levitated across and out of his bed is supposed to be scary, but I physically laughed out loud.
In fact, all of the supposedly scary scenes in Paranormal Activity 2 are amusing in entirely the wrong way. There's a scene where Kristi (Sprague Grayden) is reading a magazine in the kitchen, quietly enjoying a cup of coffee. Suddenly all of the cupboard doors fly open with a massive crash and a bang. Kristi screams and flees the room. With the film's use of CCTV, it's every bit as funny as a candid camera prank show. Watch out, the ghost of Beadle's about. By the time the demon drags Kristi down a flight of stairs and locks her in the basement, I was pissing myself laughing.
With the loss of the original film's director goes everything that made Paranormal Activity good. You'll doubtless piss yourself watching it, but not in the way intended.