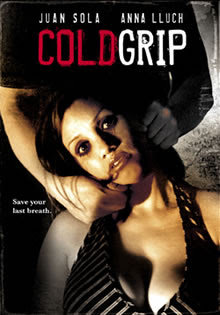 Tied with Bill Zebub's thick, pornographic Kill The Scream Queen as the worst movie I have ever seen. Unlike Kill The Scream Queen, Javier Barbera's movie actually bothers with some semblance plot. In a spin on the old AIDS Mary Urban myth, carrier Greta (Lluch) picks up unwitting men, infects them with her disease and runs off. She's having a whale of a time with her vindictive crime spree until she crosses paths with travelling businessman Robert (Sola), who takes his infection in a less than understanding manner. Robert kidnaps Greta and does vengeful torture on her.

Cold Grip is a movie so indescribably and utterly bad in a way that only the nadir of Straight to DVD can manage. Almost ten years have passed since I first watched Cold Grip. I've seen a lot of movies since then, and Cold Grip remains tied as the worst of them all. 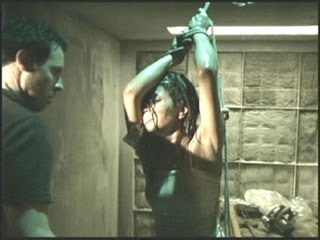 As can be particular to STD cinema, much of the screen time is made up of endless filler with no relevance to the plot: Robert making telephone calls (10 minutes), some guy talking about pitching a tent (5 mins), Robert walking around a warehouse (10 mins), a young couple talking about how much they love each other (5 mins). Never before has a film so short (not even 80 minutes) ever felt so very long.

The torture scene is the movie’s main event. Unfortunately, it's as terribly awful and incompetently done as everything else in the film. Robert kidnaps Greta by running her over with a car and whisks her away to his newly aquired torture warehouse. He chains her up, hoses her down, and proceeds to beat her to death with a baseball bat.

Presumably Greta wasn't born with AIDS; presumably she has a motive for going around infecting random men. But none of this is ever touched on by the movie or its woeful script. Greta is as thinly drawn as the urban legend which this stupid story was inspired by. But Greta is The Bad Guy, and presumably we're supposed to feel good when Robert takes to her with a baseball bat. To be fair, Robert doesn't fare much better. This archetypal businessman takes to murder like a paedophile to babysitting. Once he's decided to do away with Greta, not once does he look back. No hesitation, no regret. Robert's a killer now, because that's the way the world works.

Following Greta's death, we have to watch Robert dispose of the body. Around this time, he turns from a stressed businessman into Michael Myers himself. Dumping the body, he happens across a young couple camping nearby. Robert thoroughly kills the boyfriend and chases the girlfriend about for a bit. And then it ends. The memories, however, never go away.

Cold Grip is without a doubt one of the worst movies I have ever seen. It looks and feels as if it has been made on home video. Where a good bit of budget horror would cover the cracks with wit or invention, Cold Grip takes its woeful story and plays it utterly straight. There are constant dips in sound, and the actors are all wooden and ugly. "Save your breath," the tagline runs. I wish those involved in the production of this bollocks really had.