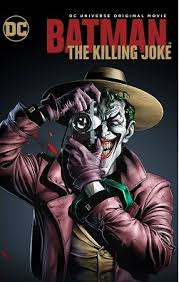 “It's all a joke! Everything anybody ever valued or struggled for... it's all a monstrous, demented gag! So why can't you see the funny side? Why aren't you laughing?”

Yeah, alright, I went through my dumb teenage* nihilist phase too, but you don't see me making a movie about it. At last, the 'definitive' Batman/Joker story for the masses** gets its official animated adaption, once again luring Mark Hamill out of Clown Prince of Crime retirement. Well, when Mark Hamill says he wants to do The Killing Joke, you do The Killing Joke. And here it is, R-rating and all. Escaping Arkham Asylum for the latest time, the Joker embarks upon his nastiest scheme yet - proving that even the best, most sane men are only 'one day away' from becoming the Joker.

And this, as anyone who knows anything about comic book history will be aware of, sees Jim Gordon kidnapped and tortured - and Batgirl 'fridged' so as to drive Batman and the Commissioner both to the brink. The most controversial of Batman stories then, and this adaptation's first order of business should be an attempt to give Barbara some agency of her own before doing away with her.

A transparent prologue gives Barbara some time in the costume, bickering with the Bat and battling a smitten criminal. With Alan Moore patently having none of it, Brian Azzarello fills in the gaps for the pre-Killing Joke Batgirl sequences. Don’t expect the fun of recent Batgirl comics though, Azzarello sticking with his usual hardboiled vibes; maintaining the R-rating by having folks shot in the head at regular intervals and inserting the most left-field, ill-advised of sex sequences you’ll ever see in a comic book adaptation. As though The Killing Joke didn't have enough controversy of its own already. 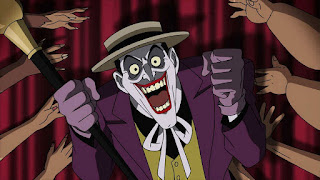 Does the added Batgirl make what follows any more palatable? Sadly not much, the story forgetting about her anyway when it comes time for The Killing Joke to fully kick in. Worse, rather than hinting at it like the book, we finally find out how far the Joker went in his treatment of Barbara – a trio of hookers confirming to Batman that no, the Joker hasn’t visited them like he usually does after escaping Arkham (!), so he must have gotten his ‘kicks’ elsewhere. The lingering question at the ending is also answered, albeit in a more underwhelming manner.

However you feel about the book (it's still a classic!) there’s always Brian Bolland’s career-high artwork to fall back on. This animated movie has no such luck, being surprisingly slapdash in places. The Dark Knight is depicted well enough (we’re well rid of that horrible chin-strap most DCAU movies lumber him with), but this Joker is ugly in the worst way, lacking Bolland’s sense of detail or most cartoons’ vibrancy. It’s only when the animation stops aping Bolland and does its own thing that it works – see the Joker, staring up at his neon nightmare, depicted in eye-bulging anime glory. The action sequences, at least, are well done, if all too brief (and seemingly cribbed from the Two-Face story Faces, in places). Rubbish musical routine aside (Arkham Knight did it better), the rest of it is simply the novelty of hearing Mark Hamill do all of Alan Moore’s famous Joker monologues. 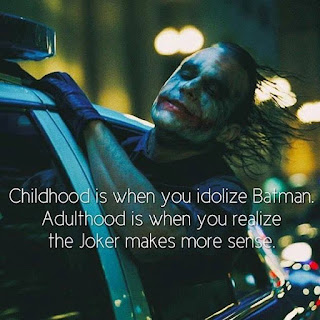 This Stupid Fucking Meme: The Movie

This, at least, doesn’t disappoint. The voice over legend gets to do pre-Chemical Dip Joker, enlivening a series of flashbacks which felt unnecessary even when Alan Moore did them. He and Conroy haven’t let us down yet, and The Killing Joke doesn’t disappoint from that perspective. Ray Wise and Tara Strong are also good as the two Gordons, gamely playing to an audience who only really care about their legendary leading men.

While this punchline is less overtly nihilistic than Moore’s template, it should change few minds. Those who dislike the story for its controversies and grim legacy will find little redemption here (no, not even in an Oracle nod), while the curious cult of Joker will continue to idolise his dim, bleak Nihilism 101 philosophies. Those who can appreciate the book for its place in history and considerable artistic merits will be worst off – it’s a cheap adaptation with bad animation, creaky writing (“a storm was coming”) and an opening that feels completely tacked on and disingenuous, heaping new problems onto an already troublesome prospect. It’s far from the worst DC Animated feature (hello Son of Batman and Assault on Arkham) but one should stick with The Dark Knight Returns movies or Year One for their classic Batman fix. Provided, of course, you can’t get your hands on The Animated Series proper.

In spite of the obvious passion and talent of its main players, The Killing Joke is a sad disappointment, and a concept which probably should have been well left back in the 1980s, when it was first published.

“I’ve heard it before. It wasn’t funny then.” Why so serious, modern Joker?