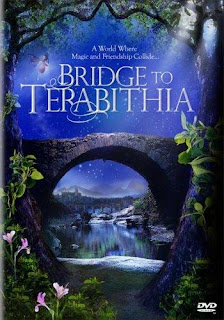 Director: Gabor Csupo (2007)
Starring: Zooey Deschanel, Josh Hutcherson, AnnaSophia Robb
Find it: IMDB
A little girl falls down a ditch and DIES. This is made even more traumatic in that the little girl is played by Anna Sophia Robb, who is very sweet and not at all horrible like so many child actors. Josh Hutcherson is fairly horrible as lead character Jesse, a spoilt little shite who spends most of his time being a bastard to his little sister and sulking in the woods. At school he meets Leslie (Robb) and is a bastard to her too, until he comes to realise that she might actually be quite cool. Y'know, for a girl. He invites her to the woods to meet the trolls and fairies that live there... and then she falls down a ditch and DIES.
Oh, nice marketing, Bridge To Terabithia. When I watched Bridge To Terabithia I was recovering from the death of my younger brother. With my sister, I sat down to watch what we expected to be a cuddly fantasy film about trolls and fairies and Zooey Deschanel being elfin and awesome. What we got was a young girl falling down a ditch and DYING.
Bridge To Terabithia is a very nice movie about loss and healing and also a little bit about fairies and Zooey Deschanel being elfin and awesome. It is a good movie to watch so long as you're prepared to see a sweet young girl fall down a ditch and DIE in front of her young friend. Robert Patrick is good as Jesse's overworked father, whilst Zooey Deschanel plays an elfin, awesome school teacher. If Zooey Deschanel had been working at my local school, home education be damned, I would have signed up on the spot.
There are some nice fantasy scenes with elves and ogres, should that sort of thing interest you. Stick with it after Anna Sophia Robb DYING IN A DITCH and you'll be rewarded with closure and Jesse learning to be less of an asshole. But to get to that point, you do have to endure AnnaSophia Robb being DEAD IN A DITCH.
Bridge To Terabithia is a fine film to watch. Although beware, the bit where AnnaSophia Robb DIES IN A DITCH is fucking traumatic.