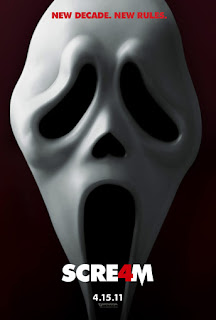 Director: Wes Craven (2011)
Starring: Neve Campbell, Courteney Cox, David Arquette
Find it: IMDB
Inconsequential incompetence from people who should really know better. Scream isn't my favourite franchise of the big horror films, but I really enjoy the classic Scream and entertaining Scream 2. I thought that Scream 3 would remain the series' lowest point. And then I saw Scream 4. It's less contrived than its most immediate predecessor, technically a better film, but one that I despised immensely nonetheless. There will be spoilers, because it's the spoiler-y bits that are the worst.
Sidney Prescott (Campbell) is back in town to promote her book, a no-doubt heartwrenching account of her struggle to overcome the demons of her past. As soon as Sidney returns to town, people begin dying. Sheriff Dewey (Arquette) and wife Gale (Cox) once more try to uncover the murderer's identity whilst a truckload of horrible, horrible college students die in violent and painful ways. The best thing about Scream 4: Jamie Kennedy isn't in it and nobody mentions the fact that Jamie Kennedy isn't in it. In that respect, Scream 4 is the best Scream so far.
Everyone who isn't Sidney, Dewey or Gale is horrible and deserves to die. Unfortunately, too much of the film's time is spent with these obnoxious teenagers. There's an effort to convince us that Sidney's cousin Jill (some girl who looks like Rebecca Black and acts with about the same competence as Rebecca sings) is a main character, but you won't care about her or her stupid friends. Hayden Panettiere gets far too much screentime. Would that she were relegated to a cameo with fellow annoyances Kristen Bell and Anna Paquin.
It's also the first Scream since Scary Movie, and that really hurts Ghostface's cause. He's no longer remotely scary. The comedy in Scream 4 has also been upped, so there were times when it actually felt like a Scary Movie anyway. There's much talk of 'new rules' and the unpredictability of remakes/reboots, but Scream 4 is actually the most predictable Scream so far. "The only way you can guarantee survival in a modern horror movie..." is to be Sid, Dewey or Gale, apparently. Not for an instant did I think that any of the main characters would be killed off, and it leads to a very boring viewing experience. Gale's Commissioner Gordon act in the midsection should have no-one fooled. A better film would have killed off at least one of the main trio (ideally, two of them). There's no suspense at all to any of it.
Why does Sidney insist on describing herself as the sole survivor of the Woodsboro murders? Do Dewey and Gale not count? And I've always found it hard to believe that anyone would turn a national tragedy into a movie franchise ala Stab, let alone organise a massive frat party on that tragedy's anniversary. On that basis, I have no idea why my Shoot Em Up Columbine party never took off. Following a stabbing, one character's chances of survival are described as "touch and go" and then in the very next scene, she comes out on top of a beating that Jason Statham would have had trouble with. Scream 4 is ridiculous nonsense and I hated every moment of its final act.
What I did like: Honestly, I thought the first half an hour was really good. The Anna Paquin/Veronica Mars bit of meta at the start. The return of Heather Graham's Stab. Any time David Arquette is on screen. Anthony Anderson (all five minutes of him). The fact that Stab was directed by Robert Rodriguez. There's a lot more gore and violence than I expected. Some of the jokes are quite funny. And I loved the fact that Jamie Kennedy was not in this film.
Everything else is a depressing waste of time, talent and history.