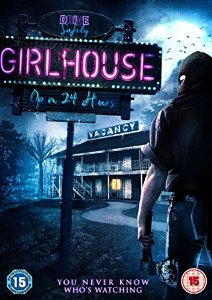 Online strippers live in a house together, constantly and intimately filmed by a Big Brother style setup recording their every move. Angry spurned mysoginist Loverboy (a man allegedly called Slaine in real life) breaks in, wreaking brutal violence upon the women he deems to have mocked him. Girl House opens with a quote from Ted Bundy, but it's the (paraphrased) one by novelist Margaret Atwood that seems more appropriate here: "Men are afraid that women will laugh at them. Women are afraid that men will kill them."

And so Girl House opens with little Loverboy (Isaac Faulkner) mocked by two very young girls, who pull down his pants and laugh at his chode. A sequence which culminates with Loverboy smashing up Camren Bicondova's (little Catwoman from off've Gotham) face and booting her to her death from a great height. It's as troubling and memorable an opening for a horror film as one could wish for, and that level of violence rarely lets up.

And therein lies (no pun intended) the rub. On the one hand, Girl House in no way glorifies its killer, being an outright condemnation of an angry weirdo and his online ilk, a genuine threat and a bitter portrayal of hateful misogynists convinced that womankind owes them something. On the other, however, there's so much glee there in depicting his crimes that one has to wonder where the filmmakers' loyalties lie. Or, indeed, if they should lie anywhere. Girl House is no feminist opus. But does it have any obligation to be?

No-one ever expected a cheap exploitation movie like Girl House to be at all forward thinking, but by having its antagonist be a very specific sort of male threat, it does open doors to equally specific criticism that could otherwise and ignorantly be ignored with a shrug. The boyfriend character, for instance, who casts aspersions upon Final Girl Kylie's choice of lifestyle and frequently suggests that she quit, displaying a (much milder) form of entitlement the likes of which are responsible for Loverboy's killing spree in the first place. Mixed messages much?

Girl House doesn't know upon which side of the fence it's sitting; whether to be empowering (it isn't) or exploitative, whether to leer or shy away, greedily attempting do everything the same time and just winding up muddled as a result. Even a confused cross between Halloween and My Little Eye has its moments though, and Girl House is always gripping, even as it grasps dimly at its messages, distracted by all the boobs sometimes, often and nearly on show. It's not even properly explicit - being surprisingly prudish for a film about strippers living in a house together.

Ultimately, it's this inconsistency which does the film in for me, a horror film which takes in important, relevant and modern ideas about misogynists and online pornography... and then proceeds to make it so that the male audience can still have a good fap over it at the same time.