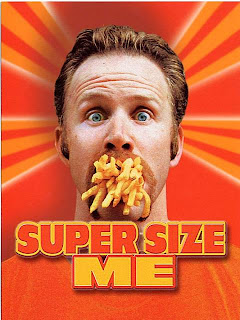 Director: Morgan Spurlock (2004)
Starring: Morgan Spurlock, Ronald McDonald
Find it: IMDB
What happens if you eat nothing but McDonalds' for a month? Shockingly, it makes you fat and ill. I would have thought it obvious, but I'm glad Morgan Spurlock did it anyway; it saves me doing it myself as the sort of stupid experiment I would do for the sake of it. Spurlock (Spurlock) decides that for a month he will eat nothing but McDonalds' takeaways for every meal. And if a staff member asks him if he'd like to 'supersize it', then 'supersize it' he must. It sounds like an extended Jackass stunt.
And at first, it plays like a Jackass stunt too. Upon indulging in his first super sized Maccy D meal, he promptly vomits it back up out of the window of his car. The physical (and a little bit mental) degradation of Spurlock over the course of Super Size Me is actually quite scary to witness. Fairly well educated in the importance of healthy eating, I found it somewhat obvious, but it's still scary to actually see it. Mind you, over here in England, we never had 'Super Size' meals. Probably a good thing. I always go for the biggest thing on the menu, regardless of how hungry I am.
It's a depressing state of affairs that Super Size Me has to exist at all; that people need telling that stuffing their face full of shit will make them ill. Following the film, the 'Super Size' option was discontinued and more healthy options were made available on McDonalds' menus. I feel about that the same way I feel about the BBFC censoring slash banning The Human Centipede 2: surely it should be my decision whether I fill my body and mind with that rot? Mind you, a diet of terrible food will actually make you ill, whereas The Human Centipede 2 won't. No matter what the tabloids or the BBFC or some dipshit who's never seen it tells you. Not that the absence of 'Super Size' meals will stop anyone truly determined to get their gut rot on either.
Super Size Me is a powerful, witty and amusing documentary. Unlike the work of Super Size meal abuser Michael Moore, you get the sense that Spurlock is generally telling the truth, and his humour actually funny. There's a great line about him punching his children in the head whenever they pass a McDonalds' restaurant. I'm going to punch my own children in the head whenever Michael Moore is on TV. Not to provoke a Pavlov's Dog style reaction, just because Michael Moore's face inspires violence in me.
I watched Super Size Me at the cinema with a friend, back in 2004. "Hey," I said, "wouldn't it be a good idea if we got Big Macs and ate them while we watched the film?" "Yeah!" As it emerges, that was not a good idea. Especially not during the liposuction scene.