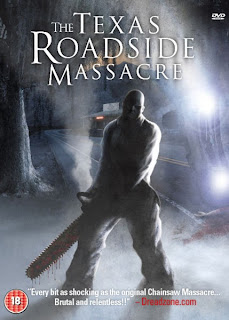 How nobody has been sued over this is beyond me. Most of the time, when you try to rip something off, you at least try to hide it. Well, if you're good at ripping things off, you do. Pro tip: call it a homage. The rest of the rime, see Lianne Spiderbaby and Texas Roadside Massacre. As you may have guessed from the title, this film doesn't even bother to hide the fact that it's a massive, staggeringly obvious rip-off. They couldn't even be bothered to change most of the title.

So in The Texas Roadside Massacre, we have a gang of teenagers, on a road trip in their van. After picking up an obviously disturbed hitch-hiker, they stop off at a roadside diner, where both the food and the owners aren't quite what they appear to be. The poor kids are then picked off one by one, before being chased by an obese cannibal who kidnaps the nicest of them (Resa) and ties the poor girl to a chair. There's no dinner scene and no chainsaw, but those are about the only elements of The Texas Chain Saw Massacre that the film doesn't rip off. "Oh, but you're just butthurt," you may argue, "just like that Child's Play film you hated." Well that may be the case, but, in my defence, The Texas Chain Saw Massacre is my favourite film of all time. Of course I'm butthurt.

Remember that line in The Texas Chain Saw Massacre where Sally says she'll "do anything" if Leatherface and his family let her go? Well the film even pockets that, in a scene in which subtext is made, well, foretext, I guess. It makes The Bunnyman Massacre look like the second coming of Tobe Hooper. It makes The Next Generation bearable by comparison. It also has time to rip off The Loved Ones, in its villains' stupid plot. The big idea? To brainwash people into working at your restaurant by drilling holes into their foreheads. Because everyone knows that victims of trepanning make the best employees. 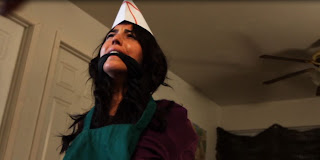 "But I have an English degree! I don't want to work at McDonalds!"

Even if you've never seen The Texas Chain Saw Massacre, this is an awful movie. It can try to hide behind the excuse of having no budget, but neither did Tobe Hooper. That doesn't excuse lazy unoriginality. Worst of all, there's barely even a roadside - and when there is, no-one gets massacred on it.