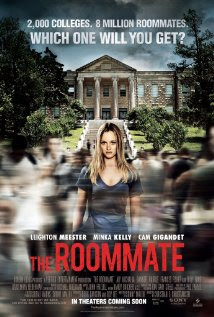 Director: Christian E. Christiansen (2011)
Starring: Minka Kelly, Leighton Meester, Cam Gigandet, Billy Zane
Find it: IMDB
Within 12 seconds of its starting, I realised that I would probably hate The Roommate. 2 minutes later, I started to hate The Roommate. One of the earliest scenes takes place at a frat party, which is a very good indication of its quality. Its lead character is Sara (Kelly), a girl who names The Devil Wears Prada her favourite movie. Of all time. And the stalker character (Meester) looks up to this moron as a role model. They deserve one another.
The Roommate has the worst soundtrack I've heard in years, all softcore American rock and the sort of thing you might expect to hear on The OC. But that's fine, because it has the worst acting, worst script and worst wardrobe department I've seen in years too. The Roommate is Single White Female dumbed down for teenagers too badly educated to realise that Single White Female exists.
Whilst everyone and everything else about The Roommate is atrocious, it does have Billy Zane, which was a nice surprise. He plays Professor Roberts, a lecturer on our heroine's fashion course. Although she's a late entry, he lets her on the course because she has good fashion sense. Which wouldn't be particularly remarkable were it not for the fact that she has this on her head at the time: 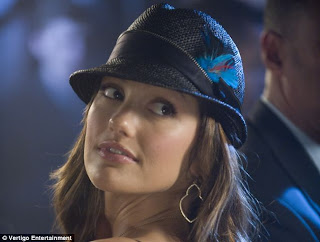 Which would be like me getting on to an English Literature course even after telling a lecturer that Twilight is the greatest book of all time. The stupid hat is not relegated to just the one stupid scene. She wears it in a nightclub at one point. But even with her ridiculous choice in headwear, Sara manages to bag Ethan (Gigandet). Ethan introduces himself by telling her how he and his fraternity buddies use spiked punch to essentially date rape girls. Charming fucker.
Meanwhile stalker Rebecca menaces Sara's friends, beats up Billy Zane and murders a kitten in a washing machine. But there's no explanation as to why Rebecca should so quickly become fixated with Sara, especially given how utterly uninteresting Sara is. Some of Rebecca's loonier actions raise a smile (a tasteless tattoo, a sketchbook and a scene in which she beats someone up in the shower whilst wearing a waterproof jacket) but its every moment feels derivative and stupid. There's even the whole angle where Rebecca starts dressing like Sara, wearing her perfume and dying her hair like Sara's. She goes so far as to steal the hat. Imitation, I suppose, is the sincerest form of flattery. By that logic, Single White Female should be very flattered right now.
The Roommate is vacuous twaddle that should be of no interest to anyone who has seen Single White Female, Cable Guy, Play Misty For Me or any other stalker movie, ever. It's reminiscent of other such dumbed down toss like Swimfan and Homecoming. Single Shite Female, more like.