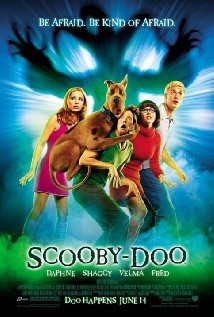 This one was suggested by Kev D of Zombie Hall
Director: Raja Gosnell (2002)
Starring: Matthew Lillard, Freddie Prinze Jr, Sarah Michelle Gellar
Find it: IMDB
A stoner (oh come on, blatantly!) and his dog drive around in their psychedelic van solving mysteries whilst eating a lot and being scared by ghosts. In live action! Although Velma (Linda Cardellini) is hot in this movie, so it completely fails as a Scooby-Doo adaptation. Velma, in fact, is hotter in this movie than Daphne (Gellar), which is just unnatural.
Matthew Lillard's greatest ever performance. Freddie Prinze Junior's most bearable ever performance. The only memorable thing Sarah Michelle Gellar has done since Buffy. The CGI dog is actually the best thing in Scooby-Doo. Which is not a slight on anyone else, since the cast really is quite good. Matthew Lillard's extended Shaggy impression is very impressive. You'd be hard-pressed to tell the difference between him and the chaps that voice the television series' Shaggy. In the case of this adaptation, the real-life actors do just as well as their cartoon counterparts (in your face, The Flintstones). Even Sexy Velma does a decent Velma impression. Apart from being sexy. My grandmother always used to hate Daphne and Fred. Whenever I'd visit her house and watch cartoons, she'd sit there telling us how much she hated Daphne and Fred and also Asian people. But especially Daphne. Scooby-Doo is so faithful, I think she'd hate real-life Daphne and Fred too. With this irrational phobia of Asian people and Freddie Prinze Jr, my grandmother is basically Mark Millar.

After one argument too many, the Scooby gang split up and go their separate ways. They find themselves reunited when they are called to investigate spooky goings on at Mr. Bean's island. Spoiler: Scrappy Doo is revealed to be the criminal mastermind behind it all. And that is Scooby-Doo's finest touch. The movie is filled with in-jokes and winks to fans of the show; the revelation that Scrappy is the Big Bad being the best of them all. It was written by James Gunn, scribe of the Dawn Of The Dead remake, and writer/director of Super and Slither. Even in a kiddies' film like this, the man's subversive sense of humour can be felt.
Look, it's a kids' movie. I'm not going to whinge and gripe about Scooby-Doo, although, sure, the body swapping stuff is stupid, Sarah Michelle Gellar is a bit rubbish and too much of the humour revolves around how funny farting is. Actually, farting is quite funny. Especially when a CGI dog is doing it.