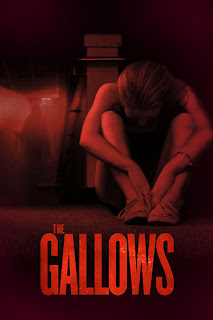 Years after a kid dies in a school play related mishap, a drama class decides to take a second shot at the production as some misguided sort of tribute. As if that wasn't a stupid enough idea, the class asshole (classhole?) and his brainless friends decide to break into the school and trash the set. Several locked doors and an angry spirit later and we're in full-on shrieking death mode.

The Gallows is further evidence to my theory that the worst character in a found footage movie is always the guy holding the camera. That's especially true here, with the diabolical dipshit Ryan (Shoos) making up for what he lacks in face time with the worst voice and demeanor this side of a a hyperactive Nickelodeon cartoon character. His chums aren't much better either - particularly not perma-zonked Reese and the rubber-faced Pfeifer.

Not even these numpties can completely ruin the first half though, which at least provides a little mean-spirited amusement (Gallows humour) in throwing a football at a nerd and its effective opening sequence. This is easier to comprehend and deal with than the hoarse screaming bullshit of its predictable second half, which consists mostly of running around in the dark shouting either abuse or each others' names into the night - when it's not taking sneaky shots of Cassidy's sweaty boobs, that is.

For a film with such immediacy at its core, The Gallows is so very drawn out and tiresome. It takes an overplayed found footage cliche (character staring, snotty and terrified directly into camera during a rare moment of silence - then is suddenly dragged off into the darkness) and makes that the whole concept, washed out in ghastly green and red nightvision filters. It's an ugly film, both in its ideas and visuals, and, worst of all, hangs around far too long past its welcome.