It Came From Poundland: ALONE WITH HER 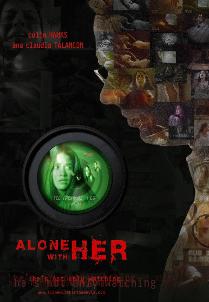 
Thanks to the British economy going down the shitter, the high street is ruled by three great powers: Poundland, Primark and 99p Stores. In these giants, anything is possible. For 99p, one can buy two cans of an energy drink called POWER HORSE. And let me tell you, POWER HORSE gives you exactly the energy boost that one would expect from a drink called POWER HORSE. In Primark, you can get your very own Batsuit (don't call it a onesie) for £15. In Poundland, however, they have taken to selling something  very much within this website's remit: horror movies.

Is it possible to buy decent horror for £1? Joel Harley investigates. I have bought an awful lot of this Poundland horror, since they first began stocking it. I've never watched a single one, until now. Who knows, this might become a regular feature.

Alone With Her has the very interesting distinction of starring Tom Hanks's creepy-looking son. I first noticed Colin Hanks in Untraceable, during which I thought "that guy looks like a young Tom Hanks". He has since popped up in the latest series of Dexter and the odd romcom and television episode. In Alone With Her, he takes centre stage as a very, very creepy man.

Doug (Hanks) meets Amy (Talancon) and promptly sets up secret surveillance cameras around her home so as he can watch her every move. Not in a gross way: he merely wants to learn everything about her so's he can woo her most effectively. It's quite romantic, when you stop to think about it. Like Bill Murray in Groundhog Day. The problem with wooing a girl via hidden surveillance is that you get to hear her slagging you off to her mates. It's why Mel Gibson turned into a crazy misogynist; hearing what women really thought of him in What Women Want (not to be called 'sugartits' is a good start). Surprisingly, neither her or her friends ever say "you know, that Colin looks a bit like Forrest Gump." I overheard someone say "that's Joel. He always tucks his t-shirt into his trousers" once. I was fucking heartbroken. Cthulu knows how I would have reacted if I'd heard them say I have sweaty hands. In that respect, Doug shows an awful lot of restraint.

The intrusive but dispassionate gaze of the camera is contrasted wonderfully with creepy Colin's slimy behaviour. Amy is a sympathetic protagonist, even if her choice in male company does leave something to be desired. The idea behind it is an insidious one, effortlessly scary and creating a great atmosphere and boiling tension. The story is seen through the lens' of Doug's cameras, but its presentation feels more natural and less gimmicky than most found footage horror films. The climax delivers an insufficient payoff to an otherwise impressive structure, but then, there are only so many ways a story like this can go. Alone With Her reminded me of The Collector (not that one) crossed with the more recent The Resident.

Alone With Her is a chilling, tense psycho thriller centered around a great set of performances from its leading duo. Not bad for £1.