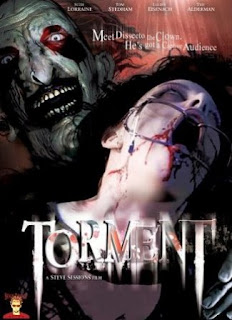 Director: Steve Sessions (2008)
Starring: Suzi Lorraine, Tom Stedham, Ted Alderman
Find it: IMDB, Amazon
Recovered crazy person Lauren (Lorraine) takes off for the weekend with her alcoholic husband (Stedham), only to be menaced by a masked clown that isn't as scary as the one on the DVD cover or anywhere even approaching Tim Curry. Still, Torment is a passable bit of clown horror, enjoyable for its so-bad-its-good dialogue, performances and gore. 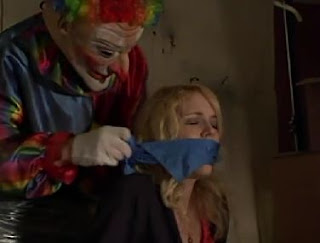 If you have a clown phobia, you might wrangle an extra bit of terror from Torment's tedious, repetetive torture sequences and prolonged stalk n' slash stuff. As the couple bicker, it's entirely apparent that torture scenes are soon to be inflicted upon at least one of them. Indeed, the
scenes of bickering are intersected with scenes in which Dissecto The Clown pokes and otherwise annoys a pair of captive Missionaries hidden somewhere in the house. But don't worry, squeamish people, the torture scenes are so inept its impossible to be scared by them. A town Sheriff even shows up to warn Lauren that Evil Is About. Does anyone listen? Well, no, because Lauren might be crazy and probably imagined the Sheriff too. Torment is that sort of slasher movie.
Still, I've seen far worse as STD slasher features go, and collectors of ironic joys will find some amusement within. It's not quite a Torment to watch, but nearly so.
Ugh.

Email ThisBlogThis!Share to TwitterShare to FacebookShare to Pinterest
Labels: slasher movies, So bad it's good, Torture-guff