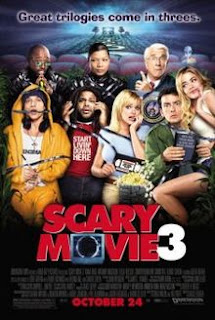 The last quarter-way tolerable Scary Movie and the first to dip to a PG-13 rating. Heralded the coming of other kiddified Movie Movies. Stars Charlie Sheen and the late great Leslie Neilsen. A mixed bag, then. By which I mean a mixed bag of shit.
Charlie Sheen plays the Mel Gibson role in this spoof of Night Shyamalan's Signs (coincidentally, his last tolerable movie too) whilst the indefatigable Anna Faris mugs about for a Ring bit. That they couldn't even get a Wayans brother to appear in this Movie speaks volumes for its quality. They managed Leslie Neilsen, Charlie Sheen and the fat black guy from off've Transformers though, which is far more than is deserved. We'll take Anna Faris as a given, since she'll appear in literally anything. And yet I don't have the heart to dislike Anna Faris. I'll forgive her even My Super Ex Girlfriend.
The 'jokes' range from Anna Faris falling over a lot (HA) to someone mishandling a corpse (HA HA; and done a lot better in Drag Me To Hell) to Leslie Neilsen mistaking disabled people for aliens (HA HA HA). I feel sorry for all of the actors involved, except for Charlie Sheen, who obviously doesn't give a fuck. If he had been in Signs instead of Mel Gibson, it would have made for a much better movie. Some jokes are funny. Some are amusing. Most of them aren't. Few of them are horror movie related. The Simon Cowell cameo is horrible, even if he does get shot. And the 8 Mile skit is horrible. Hot Shots: Part Deux this ain't.
If nothing else, it's funnier than Two And A Half Men. But fuck you if you think I'm labelling this in the 'comedy' section.