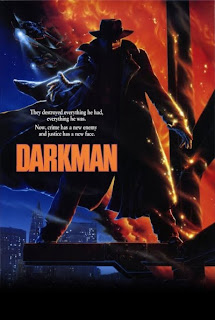 Director: Sam Raimi (1990)
Starring: Liam Neeson, Frances McDormand, Larry Drake
Find it: IMDB, Amazon, The Liam Neeson fanclub
What has Darkman to do with St. Patrick's Day, you ask? Well, gentle idiot, look no further than its leading man - a Mister Liam Neeson. You don't get much more Irish than Liam Neeson. A man so awesome he has this Tripod fanpage dedicated to his awesomeness, Neeson can these days be found badassing his way through such actioners as The A-Team, Unknown, Crash Of The Titans and that xenophobic one where he beats up half of France.

Such a massive loss :-(
There seems to be a lot of surprise at Neeson's rebirth as Mr. Action, but I'm not sure why. Neeson's badassery is hardly unprecedented. Never mind his roles in The Phantom Menace and Rob Roy (in which he played , um, a Scotsman), Neeson's awesomeness was cemented for me by the first time I saw Darkman.
Massive Sam Raimi fan that I am (even Disco Peter Parker gets teh LOLs), Darkman was my first experience of the director's work. It's his third best piece, and one of my favourite superhero movies of all time. Neeson plays Doctor Peyton Westlake, a scientist hard at work at the invention of a fully functional but laboratory-constructed skin. Just as he seems to be making a breakthrough, Westlake runs afoul of gangster Durant (Drake), who destroys his work, kills his assistant, blows up his lab and leaves Westlake for dead. Completely disfigured, Westlake becomes Darkman; a cross between The Burning's Cropsy and a really pissed off Batman. He uses his fake skin thing to create a variety of masks and disguises for himself, but the stuff can only last a few hours at a time before it melts. Oh, and a biproduct of his disfigurement leaves him unable to feel pain and liable to get really really pissed off with things.

Talking of teh LOLs...
Can Westlake rescue his love life and get revenge on the thugs what wronged him? And will there be a cameo from Bruce Campbell? All these questions and more are answered in Darkman. The movie is Sam Raimi on a form he wouldn't recover until Drag Me To Hell. There's black humour, ultraviolence and his brother Ted. Liam Neeson is brilliant as the conflicted hero, the underrated Frances McDormand makes for a sympathetic girlfriend and Larry Drake is reliably slimy as villain Durant. The action is extremely well done and the special effects do a wonderful job with Darkman and his shonky face.
Darkman is brilliant. There's a fight with a helicopter and Larry Drake cuts people's fingers off with a cigar cutter. Liam Neeson has a Nicolas Cage moment with a stuffed toy. There's plenty of Raimi's usual camera trickery. Darkman is a great film. Also great: 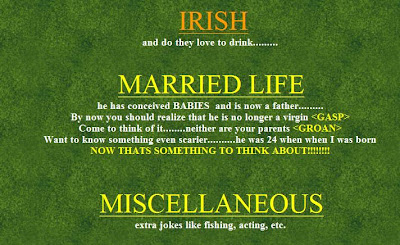 SOMETHING TO THINK ABOUT!!!
I can't say I'd ever thought about Liam Neeson's virginity. But now that you mention it... Also, I resent that jibe at the Irish. Also, do any jokes actually exist about fishing or acting? I'd definitely recommend visiting the Liam Neeson fan club. But not all at once, because you'll probably crash it. The joys of Tripod. The below score applies both to Darkman and The Liam Neeson Fan Club.