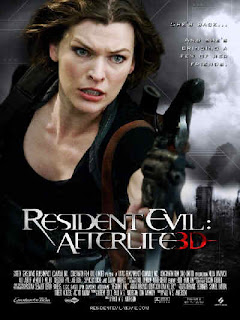 Director: Paul WS Anderson (2010)
Starring: Milla Jovovich, Ali Larter, Kim Coates
Find it: IMDB, Amazon
Despite the series' many faults, I've always had a soft spot for the Resident Evil movies. I hated the second one and can't remember much of Extinction, but I can always make time for a little Resident Evil. The first flick is a regular visitor to my DVD player. By no mean coincidence, I really like Milla Jovovich. I even like WS Anderson every now and then. Event Horizon is one of my favourite space horrors of all time and the original Resident Evil still stands as the best videogame adaptati 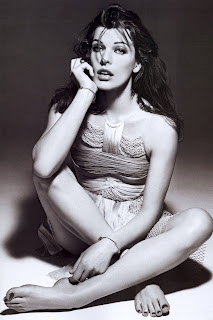 on yet made.
Afterlife picks up after the post-apocalyptic events of Extinction. The world is still dead, save for a few pockets of resistance. In the opening act of the movie, Alice (Jovovich) scuffles with Big Bad Albert Wesker (Shawn Roberts) who strips her of her silly superhuman powers and escapes. Months later, Alice is flying around in a cute little airplane trying to find fellow survivors. She reunites with Extinction's Claire Redfield (Larter) and heads to LA, where she runs into a band of other survivors. Hiding in a prison; Wentworth Miller from off've Prison Break. Who tells them he knows how to escape the facility. Yo ho ho. He plays Resi regular Chris Redfield.
Zombies are fought and there are a few neat nods to Resident Evil 5. The 'Majini' zombies make an appearance, as does The Executioner, who comes at Alice and Claire with a rather hefty axe. Wesker wears the sunglasses and leathers combo from his last outing in the videogame. The final fight at the end is rather reminiscent of that particular boss battle. Indeed, Afterlife works so well as a videogame adaptation that I'm struggling not to describe some of the set pieces as "boss battles." 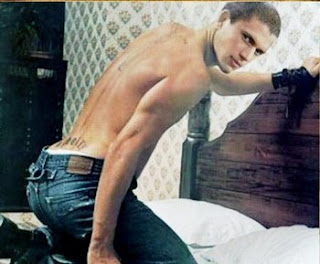 Like most entries in the franchise, Afterlife has its share of problems. Some of the CGI is crappy (particularly the zombie dogs), the story is nonsensical and it's a very immature piece, clearly designed to appeal to teenage boys and fellow sufferers of Jovovich Blindness (an actual medical issue which causes the inflicted to sit through trash like this and Ultraviolet). But it's easy to watch, enjoyably rubbish and chock full of violence and photogenic people. On that note, yes. This review was but an article to post that picture. Sorry about that. Here, have a picture of Wentworth Miller to make up for it:
I can't say I'd ever pictured Miller as Chris Redfield, but he does fine enough. All of the performances are good. Probably more than a movie like Afterlife deserves. The closing moments set things up for a sequel. Does it need one? No. Am I thoroughly on board anyway? Sure, why not.

Email ThisBlogThis!Share to TwitterShare to FacebookShare to Pinterest
Labels: Zombies