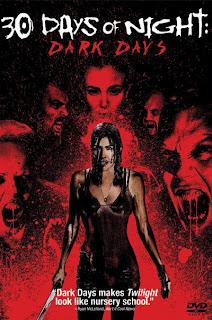 Director: Ben Ketai (2010)
Starring: Kiele Sanchez, Rhys Coiro, Harold Perrineau
Find it: IMDB, Amazon
Yay. A sequel to my favourite modern vampire movie not to be entitled Let The Right One In. It has a multitude of problems (for a movie supposedly set over a period of 30 days, its pacing sucks) and Josh Hartnett is in it, but I love 30 Days Of Night. It's the perfect antidote to a world of sparkling and whingeing vampires.
Dark Days loses most of what made the original good. Barrow, Alaska doesn't really feature, Melissa George isn't in it, David Slade isn't in the director's chair, and it went straight to DVD. But still, Dark Days is a worthy sequel. It's a Wrong Turn 2 sort of sequel. Kinda crappy but still very much a blast.
Stella (Sanchez) has left Barrow and relocated to Los Angeles, spreading the word about vampires. There, she attracts the attention of both a vampire Queen called Lilith (Mia Kirshner) and a team of vampire hunting badasses. One of whom happens to be Michael from offa LOST. Any movie which stars a LOST alumni is usually fine by me. Also amusingly, Michael is as useless here as he was in LOST. There's also a rogue FBI agent, a girl who doesn't like Stella very much, and a nice vampire called Dane. Well, he had to be nice, didn't he? Dane is a crap vampire name.
Whilst the plot is more predictable and everyday than its predecessor's, Dark Days continues the tradition of cruel violence, ridiculous gore and cool vampire designs. The way the vampires look and sound is carried over from the last 3o Days, all teeth and black eyes and predatory squeals. Unlike most bloodsucker flicks, the emphasis here is on dismemberment over staking, and this leads to some very entertaining head-popping scenes. Heads are cut off, shot at and thoroughly caved in. The action here is wonderfully gory. It's everything one could ask for from an STD sequel.
The acting is occasionally shoddy and all of the environments look the same (the bit set on the boat could literally pass for the bit set in a warehouse and the bit set in a tunnel) but these issues can be mostly ignored for the sake of silly violence and bloodsucking action.