Scary Trek 2: Why Star Trek is Scary: The Next Generation 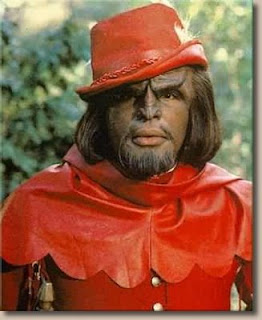 Why Star Trek is Scary:
Wherein the header picture says more than words ever could

Scary Trek continues. The Next Generation is set years after the Original Series. The Starship Enterprise is now Captained by Jean Luc Picard (Patrick Stewart) and everyone wears really crappy uniforms. The future has become an even nicer place than it was before, with androids and klingons manning the bridge, and blind people manning the engineering department. The Next Generation has its detractors because of how well everyone gets on: there's very little conflict between the main characters and most everyone seems a little bit wet. Even Captain Picard is quite cuddly.
But beyond that, The Next Generation has its moments of future-scariness. One of the movies even stars Tom Hardy. There's a main character played by Brent Spiner. Brent Spiner is creepy even when he's playing a good guy role. It's a good job the crew get terrorised on a regular basis, as this bit of schadenfreude helps distract from the fact that The Enterprise is now manned by a crew of dickheads. I never use the word douchebag, but for this man I'll make an exception: 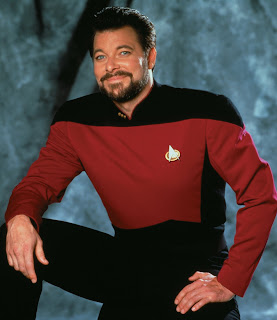 I like bearded Riker because it hides some of the Smug
There really is no other word. Anyway, onto the scary. For the Next Generation of Scary Trek, Borg episodes are generally good. In the later seasons, The Borg would become a bit overused; the Star Trek equivalent of Freddy Krueger. But generally, when The Next Generation was at its best, The Borg weren't far behind. Q Who and The Best Of Both Worlds are probably the best Borg episodes, and, thanks to them, First Contact is hands-down the best Next Generation movie. The Borg, by the by, are a race of robo-aliens who travel the galaxies "assimilating" other races into their number. They even get to Captain Picard and give him a stupid name (and his name was already pretty stupid to begin with). Enter Locutus: 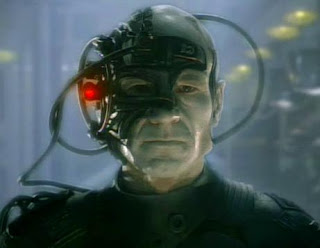 But the crew of the Enterprise aren't having none of this, and kidnap their Captain back, reversing his brainwash. Like that episode of The Simpsons where Homer joins a cult. The Borg would make several more appearances in the Star Tchrek universe, not the least in Voyager, where they got a sexy lady-Borg to join the crew. The last time they managed to be scary though, is in First Contact (where another sexy lady-Borg kidnaps android Data and tries to brainwash him too).
In Skin Of Evil, one of the main characters actually dies. Data's love interest, Tasha Yar is held captive by an evil black slime, who kills her stone dead. It's the first time one of the bridge crew is killed in a Star Trek series, and that really sets it apart from the rest. In an otherwise mediocre first season, Skin Of Evil is a highlight.
The Brain-rape episode, Violations, seriously scared Idiot Me as a child. It features Picard in a dodgy hairpiece and pornographic amounts of Riker's beard. The brain rape bit is returned to briefly in Nemesis, when Tom Hardy tries to have his wicked way with Troi. Five minutes in the Star Trek universe, and already he's trying to rape someone. This does not bode well for Batman.
An episode in which the crew are all brainwashed by an addictive computer game-type thing is pretty chilling if only because it leaves Wesley Fucking Crusher to save the day. Brainwashing is a common theme in The Next Generation. I lose count of the amount of 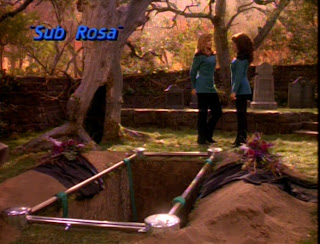 times Data turns evil and starts trying to kill his crewmates. In Insurrection, he sings Gilbert and Sullivan, which is really fucking scary.
Other episodes of note are Schisms (crewmembers are abducted and experimented on) Conspiracy (an Invasion Of The Bodysnatchers thing) and my personal favourite, Realm Of Fear, which is a Lt. Barclay-heavy episode. Barclay is The A-Team's Murdock, and is therefore awesome. Realm Of Fear deals with Barclay's transporter phobia, and has weird transporter-worms and such. It feels like it should have a cameo from Freddy Krueger.
Ignore the fucking haunted house episode (Sub Rosa) though, because it's a Dr. Crusher-heavy episode. Crusher (Gates McFadden) attends her dear grandma's funeral and spends time in a haunted house. Even Idiot Child Me wasn't scared by Sub Rosa. Probably because McFadden is The Next Generation's worst actor by far, and her character's pretty dull too. Most disturbingly, and harder to ignore is the episode where Deanna Troi is turned into a cake: 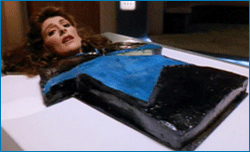 Aside from such highlights, The Next Generation is pretty failsome in the scary department. Unless bad acting scares you. Ooh, feel the burn. Where The Original Series exploited a variety of monsters and aliens, TNG plays up the humour and is more reliant on recurring villains such as The Romulans, Q and The Klingons. Klingons would probably be scarier if their name didn't remind me so much of something which happens when I don't wipe my bottom properly. Still, there are a few highlights and Star Trek is so much a part of my childhood that I can't help but love it.
Next up, Deep Space 9, Voyager and Enterprise. Or the dark shit years, as I like to call them. Truly scary stuff.