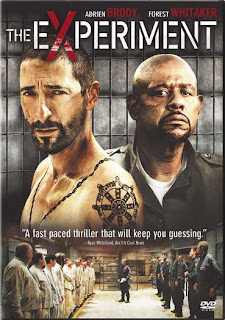 Director: Paul Scheuring (2010)
Starring: Adrien Brody, Forest Whitaker, Cam Gigandet
Find it: IMDB, Amazon
Adrien Brody continues his streak of making surprisingly good genre movies with The Experiment, a remake of a German thing set in a prison. Brody and Forest Whitaker are amongst 26 men chosen to participate in a psychological experiment in which they take on the roles of guards and prisoners, presumably to see who will break first.

Despite being cuddly Forest Whitaker, it doesn't take long for head guard Barris (Whitaker) to get his Idi Amin on. Chief annoyance is hippy prisoner Travis (Brody) who refuses to eat his dinner and stands up for the weaker prisoners. As this power struggle ensues, the other prisoners and guards stand around looking bemused. It's really a case of two men spoiling things for everyone else. Although Cam Gigandet does try to rape someone.

I don't remember enough about the original movie to try to compare the two pieces, although I seem to recall being more disturbed by Das Experiment. As with all translations from world-to-Hollywood cinema, a certain something is lost in seeing well-known faces go through the same motions. There's not a bad performance to be found in The Experiment, although the characterisation is a little too black and white for my tastes. Too quickly, Whitaker switches to all-out nutter and never really looks back. There's room for introspection and moral dilemmas, but Barris rarely seems bothered by his own actions.

Still, The Experiment is a thoroughly enjoyable, fast-paced and gripping prison thriller. I think a part of me has always wanted to see Forest Whitaker go potty on Adrien Brody's head.